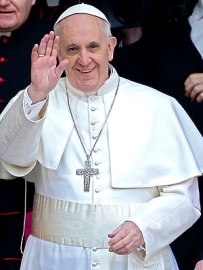 In a recent interview for American media, Pope Francis stated that the Catholic Church has become “obsessed” with issues such as gay marriage, and called for a ‘new balance’ within the Church. Naturally, the pontiff’s comments have sparked debate within the Christian community worldwide, while many within the LGBT community have welcomed his words.

Reacting to the pontiff’s comments, GLEN (the Gay & Lesbian Equality Network) has cautiously suggested that Pope Francis’ progressive attitude signals a change within the Catholic Church towards the LGBT community. “This is to be welcomed if it provides an opportunity for the Catholic Church to change the way it treats lesbian and gay people” said Kieran Rose, GLEN Chair.

As the majority of Irish people still define themselves as Catholic, there is no doubt that the Pope’s remarks will not go unheard here, although it should be kept in mind that the pontiff himself aggravated the Vatican when he hinted at the idea that even atheists could ‘go to Heaven.’ While not exactly an advocate of same-sex marriage, Pope Francis’ stance on homosexuality has been notably more tolerant – if not welcoming – than his predecessors. The legacy of those predecessors can still be seen in the Catholic Church in Ireland, however, which has regularly stood against the proposed introduction of marriage equality here.

“The Catholic Church in Ireland,” Rose commented, “[has] vigorously opposed change for LGBT people; this could be the beginning [of] a transformative change in the approach of the Catholic Church to [LGBT] people. The Irish Catholic Church’s response to forthcoming referendum proposals on civil marriage will demonstrate the practical effects the Pope’s comments are having.”

“The Pope’s comments [sends] some encouragement to [Catholic] schools and hospitals to be more proactive and affirming towards LGBT people. The call for a ‘new balance’ holds out the possibility of a new engagement by the Catholic Church on civil matters, such as on civil marriage for lesbian and gay couples” concluded Rose.