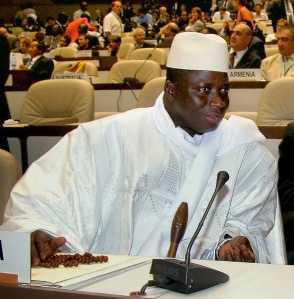 The President of Gambia, Yahya Jammeh, has given a vitriolic speech at the United Nations against homosexuality, listing it alongside greed and a desire for world domination as the three ‘top global threats’ to humanity. He also claimed that those who support gay people are supporting the “exinction” of mankind.

“Those who promote homosexuality, President Jammeh told the UN representatives in New York yesterday, “want to put an end to human existence. It is becoming an epidemic and we Muslims and Africans will fight to end this behavior.”

“Homosexuality in all its forms and manifestations which, though very evil, antihuman as well as anti-Allah, is being promoted as a human right by some powers,” said Jammeh, who came to power in Gambia through a military coup in 1994.

The leader’s words come only a day after close to a dozen foreign ministers and other UN representatives – including the UN High Commissioner for Human Rights – called on all members of the UN to put an “urgent end” to LGBT discrimination and violence. US Secretary of State, John Kerry, was one of the representatives who spoke at the UN’s LGBT Core Group yesterday, and said that “in too many places around the world, LGBT persons are still punished for simply exercising their fundamental rights and freedoms.”

Thursday’s meeting resulted in a Ministerial Declaration on “Ending Violence and Discrimination Against Individuals Based on Their Sexual Orientation and Gender Identity”, which included the section:

“We agree with the United Nations Secretary-General’s assessment that combating violence and discrimination based on sexual orientation and gender identity constitutes “one of the great, neglected human rights challenges of our time”. We hereby commit ourselves to working together with other States and civil society to make the world safer, freer and fairer for LGBT people everywhere.”

Meanwhile, President Jammeh was met by African protestors while he was in New York for the UN meeting, with people shouting “Free Gambia!” and accusing him of genocide from behind a line of Jammeh’s bodyguards. The head of state is suspected of several human rights violations during his presidency.