Posted by EILE Magazine on November 29, 2013 in Culture & Arts, Reviews 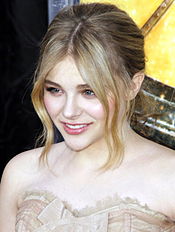 Frances Winston found this to be more a psychological thriller than a horror story, unlike the original –

Although this movie was released in America in time for Halloween, for some reason they have decided that the end of November is a more appropriate release date for it here. I suppose if blood soaked teenagers killing their classmates in a telekinetic rampage is your idea of cheery Christmas season fare, then you won’t be disappointed. If you’re anything like me though, you will be scratching your head at the release date.

There are few who aren’t familiar with this story, from the mind of uber horror scribe Stephen King, about a teenage girl who is tormented by her God fearing-mother, and who suffers abuse at the hands of classmates when she has her first period while showering after gym class. When one of them is excluded from prom because of the way they have treated her, they determine to get revenge, and cruelly pour pigs blood over the naïve young woman as she is named prom queen. However, unbeknownst to them, the arrival of Carrie’s menstrual cycle also awakened telekinetic abilities in her, and distraught and upset, she uses those abilities to cause carnage at the prom, killing many of those who mocked her.

This claims to be a more faithful adaptation of King’s novel, but indeed he himself queried the wisdom of a remake saying: “The real question is why, when the original was so good?”  Moretz takes on the role made famous by Sissy Spacek in the 1976 Brian de Palma adaptation of the novel, which garnered her an Oscar nomination. Moore meanwhile takes on the role of Carrie’s obsessively Christian mother, which saw Piper Laurie also acknowledged by the Academy back in the day. Both do a good job, but the problem is that these roles were made so iconic in the original movie you can’t help but compare them. Unfortunately, the only other cast member who matches up to their performances is the always wonderful Judy Greer as PE Teacher Miss Desjardin. The younger cast, who play Carrie’s high school contempories, go through the motions, but no one really shines.

Thanks to the two leads though, this remains engaging, although it is more cerebral and less creepy than the original. The opening scene, which shows Carrie’s birth and her mother attempting to kill her, sets it up as more of a psychological drama than a fright fest. Also, anyone who knows the story knows what’s coming.

If you are one of those people who hate horror films, you shouldn’t really have an issue with this. Yes, there is a bit of gore, but on the whole it deals more with Carrie’s dysfunctional relationship with her mother, and its knock-on effect on her life. Also, with so many reports of the effects of cyber-bullying on victims, it is good that they address this – albeit briefly.

This probably won’t be creeping people out over 35 years after it was made like the original does, but if you are looking for an entertaining and slightly gory night out, this should float your boat.