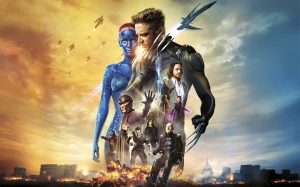 As the most successful superhero ensemble franchise ever (with one of the best looking casts ever assembled) there is a lot of hype and expectation surrounding this movie. With online “leaks” showing characters being killed off, and a time travel premise that sees veteran actors Patrick Stewart and Ian McKellan play opposite James McAvoy and Michael Fassbender, as younger versions of their characters, fan forums have gone wild trying to figure out how director Singer was going to feasibly bring the worlds of X-Men past and future together.

The answer is brilliantly. In what is an incredibly challenging ask, this film manages to tie up loose ends and act as a sequel to both 2006’s X-Men: The Last Stand and 2011’s X-Men: First Class, while also acting as a sequel to last year’s The Wolverine. There are thrills and spills galore, a solid story, brilliant performances, amazing character development and, of course, plenty of eye candy. All in all, this ticks pretty much every box!

Kicking off in 2023 the (ridiculously good looking) mutants are being hunted down and exterminated by unbeatable robotic soldiers known as Sentinels, who can adapt to fight any mutation. Realising that they will all be wiped out if they don’t take drastic action, they send Wolverine (Jackman in his seventh outing as the hirsute hero) back in time to 1973 in order to stop the shape shifting Mystique (Lawrence) killing a doctor called Bolivar Trask (Dinkledge) which was the catalyst for the creation of the Sentinels.

As Wolverine tries to convince the world weary Professor Xavier of the 70s (McAvoy) just what is at stake he must also free Magneto (Fassbender) from an impenetrable prison, so that they and Beast (Hoult) can track down Mystique and change everyone’s futures. As Wolverine navigates his way around the past, in the future his fellow X-Men are facing certain doom as the Sentinels find their hiding place in a monastery. As they fight for their lives, Wolverine and Co desperately try and alter events in order to secure everybody’s future.

Fans who have religiously followed this franchise won’t be disappointed by this. Although using wibbly wobbly timey wimey stuff (as Doctor Who would say) as a plot catalyst, they resist the temptation to completely reboot the X-Men universe. However, thanks to Wolverine’s efforts in the past, a few familiar faces do pop back up in cameos when he returns to the present, which definitely piqued my interest and excitement for the forthcoming sequel. On the whole, the story makes a surprising amount of sense (as much sense as someone being sent back in time to change an inevitable looking future can) and there are plenty of Easter Eggs and nods to the Marvelverse to keep fans happy.

For non-fans, this is still a rip roaring roller coaster of a movie. You don’t necessarily need a working knowledge of who’s who in the X-Men world in order to enjoy this (although it helps) as it is incredibly character driven, and you get a real sense of who’s who even coming to it blind. The action scenes are as epic as you would expect from a movie of this scale, but it never descends into farce chiefly because of amazing performances by everyone in the ensemble. Even those who only have a fleeting screen appearance really give it their all, and the entire cast work brilliantly together. Special mention must go to Jackman though who has spent much of the last 14 years living in wolverine’s skin and it shows!

Perhaps it’s because all involved have worked on this franchise before or perhaps it is because the predominately 70s setting allows them to jump on the nostalgia bandwagon, which is always a hit, but either way this is as damn near perfect as a superhero movie gets. With a cracking story and script, well rounded characters, and stunning special effects, this is a fantastic couple of hours entertainment that leaves you wanting more. This is a must see, and as is normal in super hero movies at the moment, hang on for a post credits scene that sets something else up!