Film Review: A Most Violent Year

Posted by EILE Magazine on January 29, 2015 in Culture & Arts, Reviews 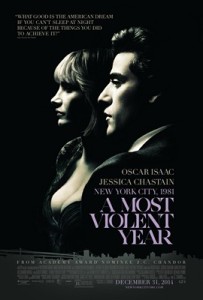 The title of this movie refers to the year in which it is set, 1981, which is statistically one of the most violent years in New York’s history. Issac plays Abel Morales, an immigrant who runs a fuel business, which he is trying to build and expand. However, corruption from all angles, and the violence that besets the city, hinder his efforts.

Aided by his wife Anna (Chastain), the daughter of a well-known criminal, they wheel and deal their way through contract negotiations and threats of action from city officials, while also trying to have a normal family life. When one of their drivers, Julian (Gabel – who has come a long way since his days in Casualty) is violently attacked and the contents of his tanker stolen, they realise that they must up the ante, but with everyone preparing to fight dirty, things escalate and lives change forever.

Incredibly slow-paced, this takes its time telling its story, but it never drags. Issac and Chastain have a great chemistry, and both turn in strong performances, ably supported by the rest of the cast.

There are more than a few nods to classic gangster flicks in terms of the cinematic style, and this filters through to the music, which in keeping with the setting is very 80s. Hugely atmospheric from the off, this becomes a problem in some scenes, where Chandor opts for little or no light, which is somewhat jarring. Although there are some violent scenes, this is not a full on action flick, and they are not gratuitous but rather a necessary part of the story.

This is a slow burner that demands you pay attention and focus. It draws you into Issac and Anna’s world, and demands that you feel something for them – even if it’s negative. These are complex characters and you will find yourself swaying between liking them to abhorring them, but that’s what good writing should do.

If you’re looking for something gripping that requires you invest fully for the two hour running time, then this is the movie for you.