Little Gem are delighted to announce that they are releasing the new GODHATESDISCO on February 20th on little gem records.

Following the success of their first release ‘Sick At Heart’ (parts 1-3), Nimoy is the first release from the forthcoming debut album by GODHATESDISCO.

Employing twin bass guitars and a table full of electronics, including samplers, drum machines and custom made noise makers, the duo make unknown wave music to defy and satisfy all musical palates.

Sampling elements of Japanese artist Isao Hashimoto’s ‘A Time-Lapse of Every Nuclear Explosion since 1945’, alongside discussions from Leonard Nimoy’s popular science based television program ‘In Search of..’, GODHATESDISCO create a buoyant and driving sonic exploration that demands to be played on repeat. You can listen here https://soundcloud.com/godhatesdisco/nimoy/s-kvaDE 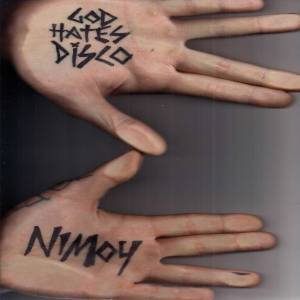 Nimoy will be available on CD, Cassette & special edition little gem player with the B side ‘Uniformitarian Naturalism’.

Little Gem Players are a release specific high quality audio player which require no downloads or computer connections, only a set of headphones or a stereo.

”Incorporating Steve Reich-esque use of found sound (a clip of Mario Savio’s affecting 1964 “Bodies upon the gears” speech) and a growling backdrop of claustrophobic, repressive textures, ‘Sick at Heart’ is an unforgiving piece of post-minimalism that challenges and ultimately rewards the listener.

Uncompromising and unique, God Hates Disco have carved out a definite tonal edge in ‘Sick At Heart’ that captures upheaval and frustration sonically, through a harsh collage of experimentalism and alternative-rock leanings.”

* The Last Mixed Tape on ‘Sick at Heart’

They support musicians and artists by helping to share, promote and sell their works.