Column: What’s So Gay About A Musical?

Posted by EILE Magazine on February 9, 2015 in LGBT, Opinion 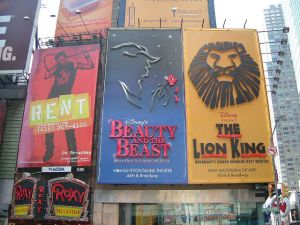 There aren’t many straight men who will admit to loving musical theatre, probably because of the homosexual connotations that go hand in hand with knowing all the words to ‘On My Own’ from Les Miserables or ‘Seasons Of Love’ from Rent.

Well okay, that last show has a storyline with strong gay themes, so I probably can’t use that as a good example.  A love of musicals is certainly one of the biggest gay stereotypes out there, but a conversation with a friend of mine this morning sparked my curiosity as to why.

During one of our usual bantering exchanges, I made reference to Eliza Dolittle and ‘Enry ‘Iggins, and was swiftly told ‘This conversation is now far too gay for me’ (which is a little ironic in itself seeing as he is gay…)  I quickly reminded him that ‘My Fair Lady’ was a musical rework of the George Bernard Shaw classic “Pygmalion”, and just because some clever person thought to add amazing musical numbers to a great story, it doesn’t make it inherently gay.

I then backed up my argument, by citing Victor Hugo’s “Les Miserables” and Charles Dickens’ “Oliver Twist”. I lost some momentum when I mentioned Frank L. Baum’s “The Wizard of Oz” – any story with a girl wearing ruby slippers, and a cowardly lion, not to mention a little lap dog, was always going to be a bit camp.

But still, there are many examples of great classics, which have been made far more popular (dare I say less stuffy?!) by adding some flamboyant and emotional musical numbers. There’s certainly a continuing market for musical productions. Just lately there seems to be even more appetite for turning popular stories and films into stage shows. For example, Ghost – the Musical, or Matilda – the Musical, or even Harry Potter – the Musical (yes really! The actual title, A Very Potter Musical).

The success of the TV show, “Glee”, also comes down to the reproduction of many staged musical numbers, where often the cast just burst into song at any excuse. There is obviously money to be made out of the popularity of adding a musical score to a story. Music adds something special. After all, music has been used to help the audience know what emotions to feel, since before we knew how to add speech to film.

The old silent movies always had atmosphere provided by a soundtrack, or, before adding any sound at all was possible, an incredibly talented organist or pianist would improvise live while watching the film, adding relevant music – the scary music when the villain was on screen, or the romantic music when the lovers were sharing a kiss. We associate different music with different emotions, it helps our brains to know how to interpret what we are seeing, and allows us to be emotional.

Perhaps it’s this emotion which makes musical films and theatre more attractive to the gay community, and a bit scary to the average straight male. Musicals have the power to make us laugh and cry, and emotions are something your typical straight man doesn’t often admit to.  My dad will probably kill me for sharing this, but I still remember when I was growing up at home, watching a soppy film on TV. Mum and I would be emotional, and it was obvious that Dad was too, but he definitely wouldn’t admit it, rushing off to the toilet as soon as the film finished, so we wouldn’t see the redness of his eyes.

Crying wasn’t manly, it was seen as a weakness, and a ‘girly thing’ that women did, while their strong, stoic man would comfort them, whilst denying any emotion of his own.  Whilst I’m not implying at all that being gay means you are feminine in nature, our society-informed gender characteristics and requirements are not quite as important in the gay world, and perhaps that is why a lot of gay men like musicals. Because they don’t feel uncomfortable in expressing their emotions. More than that, they like the way it feels to share their feelings.

Of course, in the 21st century, things have changed big time.  Men are ‘allowed’ to express their emotions more freely. In fact, it’s encouraged. Women find a man who can show his sensitive side very sexy.  We are far more in touch with ourselves and our feelings. And perhaps that is why the popularity of a good musical is on the increase.

Because modern men can cry without fear of being branded a ‘nancy’, it allows them to go to a musical – not just because they are begrudgingly accompanying a wife or girlfriend, but because they like the feelings the musical inspires in them. Perhaps…

Andy Cast is EILE Magazine’s resident columnist. He lives in Southampton with his partner and two cats. You can read more of his material in the February issue of EILE.