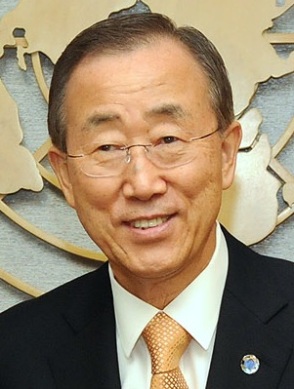 Opening his speech, where he also used the ‘cúpla focal’:

“It is an honour to be given the Tipperary International Peace Award.  I know I join a list of distinguished women and men who have received this recognition.  I know as well that you are paying tribute not just to me but to the work of the United Nations — and especially the brave and dedicated staff who bring our Charter to life every day, including many sons and daughters of Ireland.  Thank you.

“As a dynamic member of the Human Rights Council, Ireland is also a strong proponent of human rights.

We saw this commitment yet again with Friday’s referendum.  This is a truly historic moment: Ireland has become the first country in the world to approve marriage equality in a nationwide referendum. The result sends an important message to the world: All people are entitled to enjoy their human rights no matter who they are or whom they love”.

The Secretary-General also praised Ireland on its 60th year as a member of the United Nations:

“[..] in this year in which the United Nations marks its 70th anniversary, I would like to congratulate Ireland on its 60 years of membership in the world Organization”.

He also acknowledged the role of civil society organisations in the marriage referendum:

“Civil society organizations were also central in the referendum on marital rights.  Civil society must remain a key partner – in implementing the new development goals, building democracy, countering extremism and pointing the way towards a world of dignity for all”.

He said he looked forward to:

“[..]working with the people of Tipperary – and people across Ireland – to arrive at that more peaceful, prosperous and sustainable world we know can be ours.

The 70 year-old from South Korea, who succeeded Kofi Annan as Secretary-General of the United Nations in 2007, is married with three children, and travelled with his wife, Yoo Soon-taek, to be at the awards ceremony in Tipperary on Sunday last, 24th May.