Posted by EILE Magazine on May 28, 2015 in Business, LGBT, News & Current Affairs 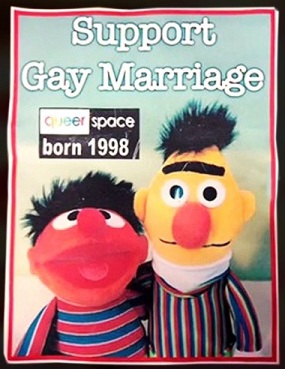 Ashers, the Belfast bakery which had been found guilty of discrimination on the grounds of sexual orientation last Tuesday, have now said they will appeal the judgment. They are being funded by the Christian Institute.

Gay man Gareth Lee had asked that a cake be baked with a picture of Bert & Ernie on it, two Sesame Street characters who have come to symbolise a gay couple, together with a written a pro-LGBT slogan.

However, Ashers refused to bake the cake on the grounds of the owners’ religious views.

The Northern Ireland Equality Commission subsequently backed Mr Lee in taking a discrimination case against the bakery at a cost of £39,000. The court found in Mr Lee’s favour, and ordered the bakery to pay £500, saying it was a business, and therefore subject to anti-discrimination legislation.

The owners of the bakery, the McArthur family, are being supported by The Christian Institute, who are also funding their legal costs.

The Christian Institute are a UK evangelical fundamentalist Christian pressure group, run by Colin Hart, who are known for their campaigns against the LGBT community, including opposing the Civil Partnership Act. They also funded a case in 2008, taken by a registrar in the UK (Lillian Ladele) against her employer, the Islington London Borough Council, when she refused to handle Civil Partnership paperwork on religious grounds.The case was unsuccessful. Members of Parliament subsequently questioned the Institute’s charitable status in light of their overt political campaigning.

The McArthurs have now said that they intend to appeal the court decision:

“After much careful and prayerful consideration given to legal advice, we have decided to appeal the judg[e]ment handed down last Tuesday. We continue to insist that we have done nothing wrong as we have discriminated against no individual, but rather acted according to what the Bible teaches regarding marriage.”

The district court judge, Isobel Brownlie, however, said that while she accepted that Ashers’ owners had deeply held religious beliefs, the business is not above the law.