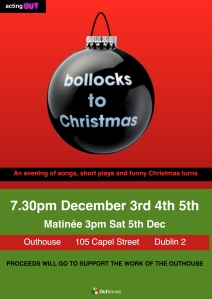 Acting Out get Christmas off to an early start with their new show, which plays at 7.30pm at Outhouse, 105 Capel Street, Dublin 1, on the 3rd, 4th and 5th December with a special matinee on the 5th.

Expect an evening of short plays and sketches with the odd song thrown in too!

” Christmas is one of those times when everyone is expected to be having fun but sometimes, especially for LGBT people this is not always the case! We’ve put together an evening of short plays which give a bittersweet version of the festive season, with the emphasis very much on laughter”.

The pieces include one about a gay man’s straight best friend unexpectedly coming onto him, a lesbian couple who get into a big row when carol singers come calling, and a fight that escalates into full blown recriminations, when two guys give each other terrible presents.

“We are also bringing back one of our most popular creations, the toxic D4 housewife, Susanne who first appeared in our play, ‘Tits Up!”, Howard said. “She is worse than ever, and if you are a gay man with a beard, let’s just say you might want to sit at the back!”.

Tickets priced €12/10 are available online at www.actingout.ticketleap.com/xmas or on the door at Outhouse.

← Marriage Act: Reg.Details & Listings For LGBT Couples Who Wish To Get Married In Ireland
Film Review & Trailer: The Lady in the Van →