Posted by EILE Magazine on January 5, 2017 in Culture & Arts, Reviews 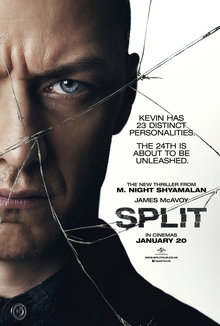 It is a long time since I got excited about an M. Night Shyamalan movie. After displaying so much initial promise with the seminal The Sixth Sense, it all seemed to go downhill (and let us NEVER speak of The Village!). However, I was impressed by his work on the Wayward Pines TV series (if you haven’t seen the first season check it out – suspenseful telly at its best) so I approached Split hopefully, thinking that maybe he had got his mojo back.

Split is being classed as a psychological horror-movie in some quarters, but instead of a bog-standard monster, the evil entity here is, in fact, James McAvoy’s Kevin. More specifically, it is Kevin and the 24 alternate personalities that inhabit his body, as he suffers from dissociative identity disorder.

When he kidnaps three girls, they soon learn that they may be able to manipulate some of his other personalities in order to escape. However, Kevin is hiding one especially dark personality, The Beast, that is determined to come to the fore and wreak havoc, and since even his own psychiatrist, Dr Fletcher (Buckley) doesn’t really believe this exists, there is nothing to stop it.

McAvoy is no stranger to playing complex characters – perhaps most notably in Jon S. Baird’s Filth, and Danny Boyle’s Trance, and these roles seem to have stood him in good stead for this part. He is mesmerising as he transforms between personalities, and at no point do the lines blur. You are always perfectly sure which character he is portraying, and with so many inhabiting the mind of one person, that is no mean feat.

Using just his own physicality, he will genuinely creep you out. The ‘psycho kidnaps pretty young girls’ thing has been done to death, but Split really gives it an interesting twist. Meanwhile, Buckley acts as an excellent buffer to his many alter egos, and does an excellent job of acting as a buffer for his more sinister sides.

As with most kidnapping tales, there is a sense of claustrophobia here, with most of the ‘action’ taking place in the tiny room in which the girls are being held. Shyamalan does a great job of building the tension and keeping the viewers on their toes, as they wonder just what the hell is going on. There is a sub-plot about one of the girl’s backgrounds that is handled somewhat clunkily, however. This is told through flashback scenes, and while relevant to the plot, it does take you out of the main story, and I felt it could have been handled more efficiently.

That aside, Split is suitably creepy, and will literally make your skin crawl throughout. It loses its way a bit at the end – perhaps in an attempt to set it up for a sequel. However, it is still a satisfying watch.

Split is not quite a total return to form for Shyamalan, but it is a step in the right direction, after a few (quite frankly) awful and nonsensical movies.