Posted by EILE Magazine on February 18, 2017 in Culture & Arts, Reviews 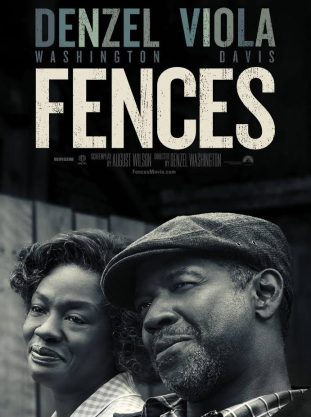 Frances Winston writes that Fences has some great performances in it, and despite being a little claustrophobic at times, is a powerful film – one not to be missed!

In the spirit of full disclosure, I should probably say that I LOVE Denzel Washington. Not just a little tiny bit. But a great, huge, big love. He is amazing, even when playing unlikeable characters, such as his Oscar-winning turn as corrupt cop, Alonzo Harris, in Training Day (and he was robbed of the Oscar for his role as alcoholic airline pilot, William Whitaker, in Flight!)

Basically he can do no wrong. Hell, he’s even directed an episode of one of my favourite TV shows, Grey’s Anatomy.

However, I will do my best not to let my feelings for the wonderful Denzel colour this review. Here he takes on the dual role of star and director (is there nothing he can’t do?).  Fences, the movie, is based on the play of the same name, which he starred in on Broadway in 2010.

Actually, he also won the Tony Award for Best Actor that year – no biggie. In all, Fences was nominated for 10 Tonys that year, winning three, so you can see why it might be considered a good idea to bring it to the screen.

Fences tells the story of Troy Maxon (Washington) who is still resentful of the fact that he never made it big in the baseball leagues, citing his race as the reason, and is angry at the world in general.

His long-suffering wife, Rose (Davis) puts up with his pontifications about how the world works. But when it affects their son, Cory (Adepo) who wants to play pro football, the cracks really begin to show. When Troy is forced to reveal that he got his mistress pregnant, their marriage is all but over, with Troy still defensively denying that he has done wrong.

Due to space, this is a very short synopsis of what is a very complex drama. Fences deals with not just human relationships, but race issues, education issues, and even on some levels the meaning of life! It was adapted for screen by the writer of the original source material, August Wilson, so it retains the integrity of his story throughout.

Washington and Davis are fantastic (and no, that’s not my bias talking) and have rightly been nominated for Academy Awards for their performances. They both bring a depth to their characters, with a single look from either often revealing more about what is going on than any dialogue Wilson has written. They are ably supported by other cast members, but make no mistake – this is their show. Their relationship and chemistry are so good, that you often feel intimidated by the intensity they exude in their scenes.

In fact, on the whole, Fences is a wonderful and thoughtful piece of work. The problem it has is one that is true of all play adaptations – it was not designed for the expansive world of film. Despite Washington’s best efforts, Fences often feels claustrophobic, and the fact that it is so incredibly dialogue-heavy instead of visual, harks to its theatrical genesis.

Don’t let that put you off though, as Fences is dark and deep, and will leave you feeling somewhat shell-shocked. It is a perfect example of how good film can be when you put two great actors, giving great performances, together, and make the focus about that, instead of about special effects or cinematic illusion.

Beautifully thought-provoking and powerful, Fences makes an impact on a viewer that will linger on long after the credits roll.

In Cinemas Now! See Trailer Below: