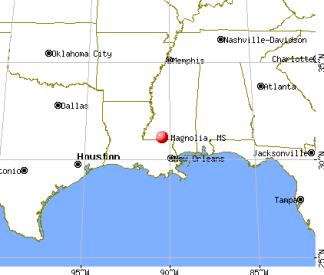 The ordinance also includes a new LGBTQ-inclusive hate crimes provision. Magnolia is now the second city in Mississippi to pass a fully-inclusive non-discrimination ordinance, joining Jackson, which passed a similar measure in June of last year.

“Magnolia has sent a clear message that all people are welcome, and all people are protected from bias-driven crimes in this inclusive city,” said Rob Hill, HRC Mississippi state director.

“As cities like Magnolia and Jackson pass these important protections, they are showing our state legislators and our other elected officials that inclusivity and acceptance are Mississippi values, and that we don’t want hate in our state.”

“Magnolia, Miss., is a welcoming, warm place, and I am pleased we have proven that yet again by passing a fully inclusive non-discrimination ordinance,” said Mercedes Ricks, alderman-at-large. “As a Magnolia resident, a lesbian and an elected official, today’s vote by the Board of Aldermen has made me very proud of this city, my home.”

The new, inclusive hate crimes provision equips Magnolia to better address hate crimes within the city, by requiring policies for identifying, investigating, and documenting hate crimes. The provision, which includes the same classifications protected under the NDO, also mandates that the city report hate crime statistics to the FBI.

Mississippi is one of 34 states that do not have statewide hate crime laws explicitly covering sexual orientation and gender identity, and one of 31 without fully-inclusive, comprehensive LGBTQ non-discrimination protections.

According to the most recent FBI statistics available, nearly 20 percent of hate crimes, reported nationally in 2015, targeted people based on their sexual orientation or gender identity.

As a recent investigation by the Associated Press uncovered, this reporting dramatically undercounts LGBTQ data, as it is based on local, non-mandatory reporting. Strong, fully-inclusive hate crime legislation at the local level plays an important role in improving data collection and ultimately saving lives.

In 2014, HRC launched Project One America, an initiative geared towards advancing social, institutional and legal equality in Mississippi, Alabama and Arkansas. HRC Mississippi continues to work to advance equality for LGBTQ Mississippians who have no state level protections in housing, workplace, or public accommodations.