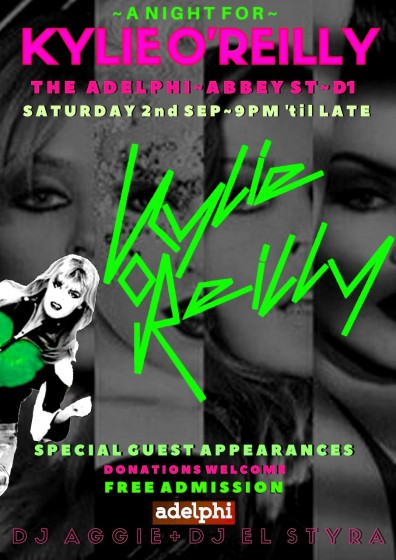 Dublin Bears are supporting a tribute to Hugh (Junior) Larkin, AKA Kylie O’Reilly, who sadly passed away in July of this year, after a short illness. Junior was a very dedicated LGBT activist back in the late 80s-early 90s, and was also one of Ireland’s best-known Drag Queens at the time. He also co-wrote the LGBT guide, Coming Out, and is credited with forming the first, all-gay boyband, 4Guys.

A few of Junior’s friends have decided to organise a benefit night for him in the Adelphi, 52, Middle Abbey Street, Dublin, on Saturday 2nd September, 9pm till late, as a tribute, but this will also help to raise some funds to help with funeral expenses. Junior’s family will be there on the night.

DJ Aggie is organising the tribute, along with DJ El Styra. It promises to be a night of Stock Aiken Waterman heaven. There will also be some special guests performing live.

The event is FREE admission, but all donations will be gratefully received, and a bucket will be passed around during the event.

Dublin Bears would be very grateful for  any support you can give, by coming along, or promoting the event on social media.