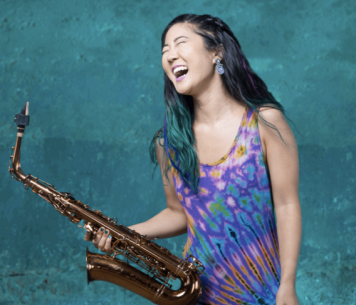 Saxophonist, Grace Kelly, Welcomes Fans to the
Studio for a Recording Session, to be Broadcast on
Facebook Live on Sunday, March 18, at 3:00PM EDT

The Facebook Live Event Marks the First in a
Series of Releases from Kelly in 2018; Full Studio Album Forthcoming

Saxophonist, vocalist, and composer, Grace Kelly, has been building a steadily-growing audience and core fan-base since her first release at just 12-years-old.
Now, she has literally opened the doors for her fans, and deepened the connection, by welcoming a small audience to the Systems 2 studio in Brooklyn, New York, for an intimate performance and recording session, all of which was filmed, and is set to be broadcast on Sunday, March 18, via Facebook Live. The date marks exactly 13-years since her inaugural concert as a bandleader.

This event is the first in a series of releases expected this year from Kelly; an EP this Spring and a studio album later this year.
Beginning at 3:00pm EDT, Kelly and her band (pianist Julian Pollack, bassist Julia Adamy, and drummer Ross Pederson) are joined by dancers and special guests, such as Leo P of Too Many Zooz, and Elliott Skinner of Thirdstory.

Members of her in-studio audience are driven to get on their feet and dance with her through tracks, including Fish & Chips, Party Chant, Feels Like Home, Unchain My Heart, and Miss You.

An additional set, available on the same date exclusively to her Pledge Music supporters, and to the public in May, will be released as an EP. This outing includes tracks such as Trying to Figure It Out and By the Grave, both fan-favorites from her previous release, unreleased original Count on Me, and Kelly’s take on Billie Jean, among others.
Kelly is no stranger to finding innovative ways of getting her music out to larger audiences.
Via Facebook, Instagram, and her YouTube channel, she has released more than 50 PopUp videos that feature her playing in non-standard live settings – including locations as unexpected as a gondola in Venice, in the water in Labadee, Haiti, and in New York’s Times Square, the latter in a spirited duet with Leo P.
“I have had so much fun doing those,” she says. “I wanted to find other ways to present my music so it feels like an experiential thing for everybody.”
If you’re lucky enough to be in the United States or Canada during the year, you might be interested in seeing Kelly live at the following venues:
April 14 | Boscov’s Berks Jazz Festival | Reading, PA
April 18 | Joe’s Pub | New York, NY
April 21 | City Winery Boston | Boston, MA
April 25 | Ford Hall Ithaca College | Ithaca, NY
May 12 | Jazz on the Vine | Elkhart Lake, WI
May 27 | Music in the Park Concert Series | Las Cruces, NM
May 30 | Yoshi’s Oakland | Oakland, CA
June 3 | Bravo! Vancouver Concert Series | Vancouver, WA
June 5 & 6 | Dimitriou’s Jazz Alley | Seattle, WA
June 8 | Pollack Hall McGill University | Montreal, ON, Canada
June 21 | Aspen Art Museum | Aspen, CO
June 22 | Zoo Music Concert Series | Albuquerque, NM
June 30 | Tri-City Jazz Fest | Cleveland, OH
August 4 | Newport Jazz Festival | Newport, RI
For more information on Grace Kelly, visit:
GraceKellyMusic.com | Facebook | Instagram | YouTube