Posted by EILE Magazine on September 22, 2018 in Culture & Arts, Reviews 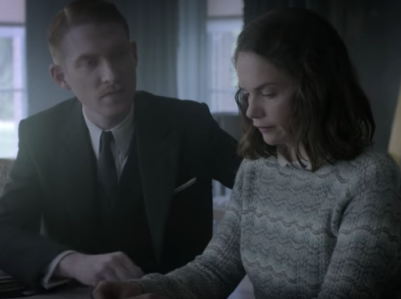 After the success of Room, many people probably expected Lenny Abrahamson to stick with a (literally) winning formula, but for his follow-up movie, he has chosen a far different animal. In fact, all this really has in common with Room is that they are both literary adaptations.

Based on the book of the same name, if you are not familiar with the story, it may take you a while to figure out exactly what type of movie this is, so I’ll save you the head-scratching and tell you it’s a gothic horror.

This isn’t immediately obvious, as initially it appears to be a rather stiff-upper-lip drama, set just after WWII. Gleeson plays Dr Faraday, who is called to Hundreds Hall – a once-grand estate that has fallen into disrepair – to treat the maid who has been ill.

He soon develops relationships with the inhabitants of the house – Rodney (Poulter) a badly-scarred Air Force veteran, his sister, Caroline (Wilson) who has returned home to look after him, and their mother, Mrs Ayres (Rampling) who still mourns the death of her first-born daughter, Suki, decades ago.

For Faraday, who had humble beginnings in the village, the house had always represented something aspirational. But strange things begin to happen, and it soon becomes obvious that there is something very dark residing in the household. Well, obvious to all but Faraday, who dismisses the strange occurrences, while pursing Caroline romantically.

Abrahamson has always been great at building tension, and this is no exception. It is well into the movie before we start to realise that there is something awry with the house, as at first we are thrown red herrings as to what may be going on.

Once it is established that there is something askew, it develops gradually until the big reveal. Unfortunately, that is something that you can see coming by the time it is finally shown. In spending so long getting to the point, it is more or less telegraphed for the audience.

Gleeson does his best stoic stiff-upper-lip, and Wilson is brilliant as Caroline, who, although appearing fragile, has an underlying strength. Apparently, in the book the character is dowdy, and there are many references made to this throughout, but despite trying to downplay Wilson’s look, she is still incredibly radiant, which is a bit discombobulating at times.

Poulter appears to have taken inspiration from Kenneth More in Reach for The Sky (a 1956 British biographical film about aviator, Douglas Bader) and he does feel somewhat wasted here. His character is the first to acknowledge the presence, but despite his obvious fear of it, we never really get to see why he is so terrified.

The cinematography and sound mixing here are wonderful, and really help to create a suitably dark and foreboding atmosphere. However, it often feels like the film relies far too heavily on this at times, at the expense of exposition or pacing. It is incredibly sophisticated and stylish, but this probably won’t satisfy those who like their scares more of the jump out of your seat variety.

Chilling and foreboding, but not really big on the shock factor, this is probably a bit too clever for its own good at times. However, if you’re in mood for a gentler, more intellectual chiller, this should satisfy.