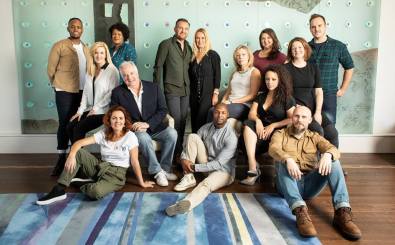 Cast of Come From Away

Casting has been announced for COME FROM AWAY, the Tony Award-winning musical, which will land in Dublin for its long-awaited European premiere at the Abbey Theatre, from 6 December 2018 to 19 January 2019. It will then transfer to London’s West End next year for performances at the Phoenix Theatre from 30 January 2019.

This joyous new musical recounts the incredible true story of how the residents of Gander, Newfoundland, welcomed the 7,000 stranded passengers of planes from around the world, during the wake of 9/11. Cultures clashed, and nerves ran high, but as uneasiness turned into trust, music soared into the night and gratitude grew into enduring friendships. On 11 September 2001, the world stopped. On 12 September, their stories moved us all.

“Come From Away has captured the hearts and imaginations of everyone that has been part of its journey, so far. We are delighted to be involved in bringing this beautiful, humane, uplifting story to Ireland this Winter, for its European premiere. It’s a show with an incredibly generous spirit that, we think, will resonate deeply with Irish audiences, and we can’t wait to see what this wonderfully talented UK/Irish ensemble will bring to the story.”

Earning widespread critical and audience acclaim, the multi-award-winning musical continues sold-out, record-breaking engagements on Broadway, and in Canada, with a 60-city North American Tour recently launched in Seattle, an Australian production confirmed for Summer 2019, and a feature film adaptation in the works.

Irish performers, David Shannon and Rachel Tucker are part of the cast.

Rachel Tucker’s stage credits include Communicating Doors (Menier Chocolate Factory), The Last Ship (Neil Simon Theatre, New York), Farragut North (Southwark Playhouse), Wicked (Apollo Victoria Theatre, London and Gershwin Theatre, New York), We Will Rock You (Dominion Theatre) and The Wizard of Oz (Belfast Lyric Theatre). She has toured venues in the UK and US with her own live performances and has released two solo albums. Television credits include the BBC series, I’d Do Anything.