Posted by EILE Magazine on October 12, 2018 in Culture & Arts, Reviews 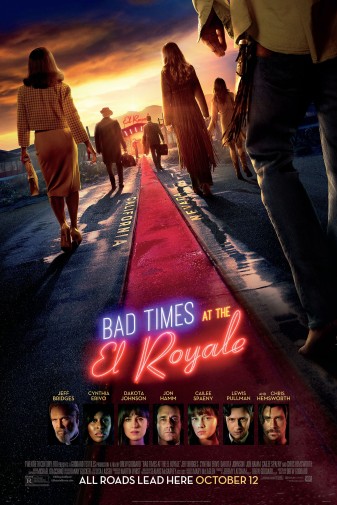 When a film has a cast like this, and the basic premise is seven strangers find themselves in the same hotel trying to survive the night, you know that it’s aiming for cult-classic status. This definitely falls into this category. It wears its influences on its sleeve (I defy you not to see shades of Tarantino and the Cohen’s throughout this!) and also manages to inject some contemporary social commentary into the storyline, despite being set in 1969.

The El Royale is a novelty Hotel, that sits astride both Nevada and California, to literally offer patrons the best of both worlds. Long past its prime, and 10 years after a shady killing occurs there, a priest (Bridges) a nightclub singer (Erivo) and vacuum salesman (Hamm) all find themselves seeking sanctuary for the night (sounds like the start of a great joke actually!).

Their check-in is interrupted by a hippy chick (Fanning) who has no time for small talk. As they all settle into their rooms, we learn that all is not as it seems. Hamm is actually a government agent, Bridges’ priest is actually a small-time crook just out of jail, and has a personal reason for visiting the place, and Johnson has a young, distressed girl tied up in her room. Even the seemingly innocuous hotel clerk (Pullman) is hiding his heroin habit, and numerous other secrets.

Over the course of the night, all of their pasts come back to haunt them in a showdown with a charismatic cult-leader (Hemsworth).

As you may have gathered, this movie is made up of several subplots that come together for the big finale. All of the characters have interesting back-stories, but some are handled better than others, and you do lose interest in a couple of them.

In terms of the cast, Bridges is amazing, bringing so many layers to what could easily have been a very two-dimensional performance. However, the standout performances come from two of the least known cast-members, Erivo and Pullman. Both are fantastic and completely engaging, and you really do find yourself rooting for them.

Hemsworth’s cult-leader is somewhat of a cliché. All snake-hips and seductive patter. He makes it work, but this is a far more complex character than what we are presented with here. However, Hemsworth looks great in the role, and spends much of it shirtless, which will no doubt keep certain sections of the audience very happy (there were certainly no complaints at the screening I attended).

The soundtrack is also very reminiscent of a Tarantino movie (he does love his classic tracks). Here we get everything from the r ‘n’ b to soul to the rock of the era (with a little bit of church music thrown in for good measure). It is impossible not to engage with the catchy tunes, and you’ll definitely find yourself going ‘I haven’t heard that in ages’ more than once.

The scenes of violence are all carefully choreographed, and almost cartoonish at times. There is a lot of blood and gore, but it never really feels gruesome. This is in keeping with the overall whimsical air of the whole movie, and will no doubt appeal to those with a weaker stomach.

If you are looking for a good old-fashioned popcorn movie, then this is it. Although it flags in parts, on the whole the energy is high, and the performances are great. It is really good fun and entertaining in a ‘park your brain at the door’ kind of way. It will more than likely definitely achieve that cult-status that it craves, and should satisfy those who want something gritty yet whimsical at the same time.

It’s the cinematic equivalent of sweet and sour sauce, and that’s popular, so they could be on to something.