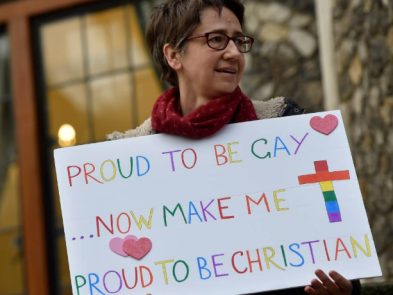 A woman holds a placard during a vigil against Anglican Homophobia, outside the General Synod of the Church of England in London, Britain, February 15, 2017 Image: REUTERS/Hannah McKay

Leading gay Christians have accused the Anglican Church of hypocrisy following its decision to ban same-sex spouses from attending the church’s 2020 global conference.

Canon Jeremy Pemberton, who in 2014 became the first Church of England priest to wed his same-sex partner, said the move to exclude LGBT+ spouses “panders to the views of the most extremely conservative” members of the Anglican Church.

“I just think they increase public revulsion at their hypocrisy and their inability to treat people decently”, he told the Thomson Reuters Foundation on Monday.

“Imagine receiving an invitation (that says), ‘By the way your spouse isn’t allowed to come as they’re the wrong gender’.

“It’s incredibly insulting and every LGBT person inside the Church of England and outside will be revolted by this kind of hypocritical and discriminatory behaviour”.

Pemberton’s comments come after the secretary general of the Anglican Communion, Josiah Idowu-Fearon, published a blog on Friday that stated “it would be inappropriate for same-sex spouses to be invited to the conference”.

The Lambeth Conference, due to take place in Canterbury, England, is held once every 10 years. It brings together representatives of the 85 million-strong church, which has a presence in more than 165 countries around the world.

The invitation process needed to take into account “the Anglican Communion’s position on marriage which is that it is the lifelong union of a man and a woman”, Idowu-Fearon wrote.

He added the head of the Church of England, Archbishop of Canterbury, Justin Welby, had held a “series of private conversations… with the few individuals to whom this applies”.

A spokesman for the Anglican Communion declined to comment further on the secretary general’s blog.

Under current Anglican law, gay marriage is still barred for church officials. Same-sex relationships for clergy are sanctioned if they remain celibate.

The Anglican Church has faced many similar rows over homosexuality over the past two decades, often pitting conservatives in Africa against perceived liberals in the west.

In 2003, the election of Gene Robinson as bishop of the US diocese of New Hampshire provoked death threats, while the same year in Britain, Jeffrey John withdrew his name to become bishop of Reading.

Other wings of the church have faced similar controversies recently.

Last week, gay rights campaigner, Kelvin Holdsworth, was shortlisted as a candidate for bishop of Glasgow within the Scottish Episcopal Church, reigniting divisions between liberal and conservative Anglicans.

LGBT+ Christian organisations pointed out an “inconsistency” in the Anglican Communion’s move to exclude same-sex spouses from the 2020 global conference.

“One does wonder who ought to be disinvited if the Anglican Communion was serious about its often-stated opposition to homophobia”, said Simon Sarmiento, chair of LGBTI Mission, which lobbies the Church of England on LGBT+ issues.