Film Review & Trailer: The Limit Of

Posted by EILE Magazine on April 8, 2019 in Culture & Arts, Reviews 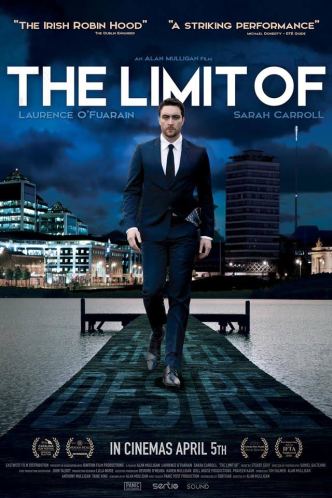 This movie has taken five years to make it to the big screen, and is very much a labour of love for director, Mulligan, and his brother, Anthony. Indeed, I actually saw this a year ago at a special IFTA screening, and although it is only now released, leading lady, Sarah Carroll, was nominated for a Best Actress IFTA for her performance here.

Set at the tail-end of the recession, O’Fuaráin plays James, a slick and organised cog in the banking world, who becomes disillusioned with refusing people loans due to the lending policies. He takes matters into his own hands, altering the details of several loan applications.

Obviously, he is extremely clever, but for some reason he puts all the information on a memory stick, which you just know is so that it can fall into the wrong hands, to move the plot along. Enter his colleague, Allison (Carroll) who confronts him. She has her own troubles, but rather than ask her about her motives, he decides to chain her up and hold her hostage, which completely shifts the tone of the movie, and does leave you with a bit of a ‘what the hell am I watching’ moment.

This is one of those films whose heart is in the right place, but its execution isn’t. There is a massive amount of talking, rather than moving the narrative along visually. I don’t think I’ve ever seen quite so many duologues in a film! It starts off with great promise, but gets lost after Allison confronts James, and never really finds its way back. The plot is too weak to sustain a feature-length movie, and, as such, it just always feels like things are being stretched out. This probably would have worked far better as a 45-minute or one-hour standalone drama, rather than a full-length film.

That said, there are some good plot-points that could have been expanded on and refined further, and both leads give excellent performances. To have actually funded and made a movie that has made it on to the big-screen is an achievement in itself, and the Mulligans are to be commended on this. Even more astonishingly, this is their first-ever attempt at filmmaking (Alan was actually a tax consultant who quit the rat race!).

This will probably prove too slow and plodding for some people, but it does show great promise for all involved. It would be interesting if Mulligan could revisit the idea in a few years, with a bigger budget, and more experience under his belt. For now, though, even though it is not the best release this week, it is great to see Irish film getting a proper platform, and the more support this gets the healthier the Irish moviemaking landscape will be.

In Cinemas Now! Trailer below: