The second week of the 16th International Dublin Gay Theatre Festival has started with 10 great new plays to see!
Book your tickets HERE!
What’s on in Week Two:
All I See Is You
Velvet
Bingo
The Little Pink Book of Masculinity
The Measure of a Man
Gertrude Stein and a Companion
Like Orpheus
Monastic
Obligatory Scene
Miss Furr and Miss Skeene
Festival Programme (PDF)

ALL I SEE IS YOU

Bobby works on Woolies’ record counter. Ralph dreams of being a teacher. One kiss and they’re hooked. But it’s 1967, and their love is illegal. A National Octagon prizewinner, inspired by real accounts of queer life from 50 years ago.

Written by Kathrine Smith; With Ciarán Griffiths (from The Bill and Shameless) as Bobby & Christian Edwards as Ralph; Directed by Ben Occhipinti
Book your tickets HERE

What do you get the man who has everything? This is the question Cormac finds himself asking as he stumbles out of an STI clinic in North London, reeling from the knowledge that he has contracted – as the saying goes – “The Full House”.
First stop: off-licence, Buckfast, oblivion. Next stop: figuring out what to with your zero-hours of a life when you’re basically a walking petri dish.
From Alan Flanagan, writer of festival favourites ‘Billy Redden’, ‘I Run, Sing, I Swim, I Dive’ and ‘Dupont & Davenport’, comes a story of dealing with extremely bad news, and learning to be a grown-up.
Writer & performed by Alan Flanagan; Directed by Dan Hutton
Book your tickets HERE

Tom has always dreamt of being a successful actor, and now after years of disappointment he is finally presented with his golden opportunity… and an impossible decision to make.
Set against the backdrop of the 2017 #MeToo movement, VELVET explores the complex realities of harassment within the industry, and how far a person is willing to go to achieve their dreams. However, when most creatives are riding the wave of change, will Tom’s opportunity slip through his fingers?
Written by Tom Ratcliffe; Directed by Andrew Twyman
Book your tickets HERE

THE LITTLE PINK BOOK OF MASCULINITY

After his sell-out run at The Manchester Fringe Festival, John is back on the prowl for gym buds and bro jobs… but no camp lads thanks, real men only. The Little Pink Book of Masculinity is a hilariously camp frolic, filled with a plethora of witticisms and astute observations on the pressure to conform to masculine stereotypes. Journey with John as he uncovers the pitfalls of the gay community, the desire for that much idealised insta-body, the treacherous path of dating apps, and just how toxic masculinity can really be.
Written and directed by John Best
Book your tickets HERE

THE MEASURE OF A MAN

How do you measure a man? Is it the way he walks, the way he talks? The critically-acclaimed queer artist, Gavin Roach, makes his Dublin debut with his one man show, The Measure of a Man. Told in Roach’s trademark humorous, raw and deeply candid style, The Measure of a Man will stare into the heart of one man’s sexual anxieties, and pull out the kinds of stories much LGBTI theatre shies away from — stories often shrouded in embarrassment or shame.
Written by Gavin Roach; Directed by Lauren Hopley
Book your tickets HERE 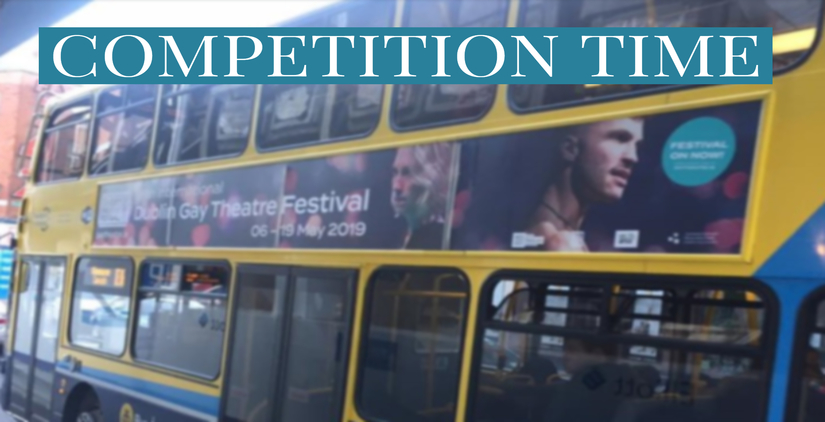 Have you spotted the gorgeous ads on a Dublin Bus yet?
Take a selfie with the IDGTF bus ad, share it on social media with #GayTheatre2019, and be in chance to win two tickets*.
*By posting a selfie on our social media, you give IDGTF 2019 the right to publish these photos.

On Sunday 19 May, they end the festival with the Gala Awards Night.
The Gala Awards Night is the highlight of the Festival, where they close the curtains on two packed weeks of theatre with a range of festival highlights, musical acts and the prestigious ‘Oscar’ Festival Awards.
A celebration of theatre, the creativity and talents of participants and the hard work of volunteers; it is not to be missed.
Tap here to book your tickets!