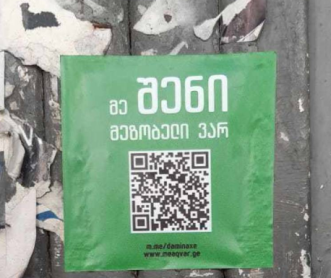 A sticker part of a LGBT+ campaign against homophobia is seen in Tbilisi, Georgia. May 17, 2019 (Courtesy of WISG)

A thousand coloured stickers with messages against discrimination were posted across the Georgian capital of Tbilisi on Friday (17th May) to highlight LGBT+ people’s struggle for acceptance in the conservative former Soviet republic.

The initiative coincided with a global day against homophobia that local LGBT+ groups said they could not mark with street rallies because of safety concerns, after coming under attack by protesters in the past.

“LGBT+ people in Georgia are seen as some different, exclusive group that might not even exist”, said Eka Tsereteli, director of the Women’s Initiatives Supporting Group (WISG), the organisation that put up the stickers.

Nestled in the Caucasus, at the crossroads between East and West, Georgia has witnessed a cultural clash between liberal forces and religious conservatives over the past decade, as it embarked on radical reforms and rapid modernisation.

Anti-discrimination laws have been passed as part of the country’s efforts to move closer to the European Union, but homophobia remains widespread, rights groups say.

“These guarantees largely remain on paper”, the United Nations resident coordinator said in a joint statement with EU and US diplomats on Friday.

The small labels affixed to posts, walls, and bridges across the city bore the words “I am your child” or “I am your friend” and a QR code that, when scanned with a mobile phone, led to a website named Meaqvar – Georgian for “I am here”.

The page listed data about the challenges faced by the LGBT+ community. More than 95% of LGBT+ people report having suffered physical or verbal violence at least once in their lives, according to WISG.

Equality Movement had planned to put up 11 billboards with anti-homophobia messages across Tbilisi, but the advertising company refused to run them citing a high risk of vandalism.

The company, Alma, did not immediately reply to a request for comment.

“(We are) very frustrated”, said Berianidze.

“That was basically the only way we came up with to deliver our message to society because we are muted and silenced in every other aspect and way and even this was unsuccessful”.

In 2013, a LGBT+ rally was broken up by a crowd of priests and thousands of protesters, forcing participants to flee.

The day has since been marked by large so-called Family Day demonstrations, backed by the influential Orthodox Church in support of “traditional family values”.

Georgia’s interior ministry said in a statement that the protection of human rights was one of its key priorities.

LGBT+ activists are planning to hold Georgia’s first-ever Pride event, including a conference and a street march over six days in June.

But organisers face similar challenges, with far-right groups that have already threatened to disrupt the event.