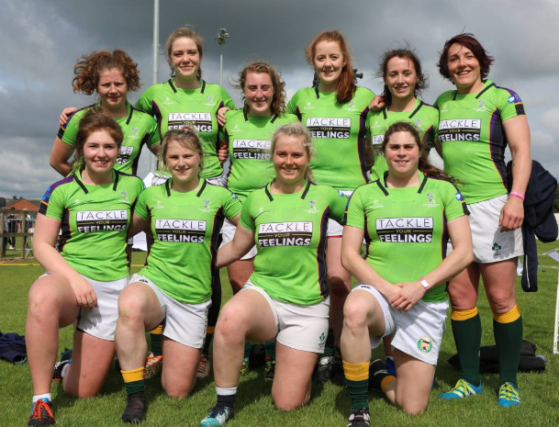 Women rugby players took to the pitch for the first time at the LGBT+ inclusive Union Cup Dublin 2019 on Saturday, with players and supporters hoping their involvement would encourage other women and greater diversity in the sport.

Ireland women’s rugby union international star, Lindsay Peat, said sport had improved her life, helping her to come out as a lesbian and deal with other people better.

“I went through a bad time where I was angry, aggressive and probably not a nice person until I could come to terms with myself”, Peat, part of Ireland’s 2017 Women’s Rugby World Cup squad, told the Thomson Reuters Foundation.

“It was a combination of my coach telling me that my personality impacted people and then also that these people stood by me even though I was an absolute ‘a-hole’ at times – and that’s the value of sport”.

Captain of the women’s Railway Union RFC team, Peat took part in the opening round of matches on Saturday as part of Europe’s largest LGBT+ rugby tournament, which is also open to heterosexual players.

Eight women’s teams are competing for the Ann Louise Gilligan Cup, which will be awarded on Sunday.

The cup was named after an advocate of marriage equality in Ireland who died in 2017.

Gilligan and her wife, Katherine Zappone, launched a legal appeal in 2004 to have their Canadian marriage recognised by the Irish authorities. The case is widely credited as the impetus behind Ireland’s move to legalise same-sex marriage in 2015.

Zappone, now Ireland’s Minister for Children and Youth Affairs, said she was touched by the tribute to her partner.

Sport had “extraordinary power” to bring forward diversity and inclusion, she told the Thomson Reuters Foundation.

“Sport can bring people who are different or feel different together whether it’s sexual identity or gender identity”, she added.

Women’s rugby is one of the country’s fastest-growing sports, according to governing body for rugby union in England, the Rugby Football Union (RFU), with 30,000 registered women playing regularly. The RFU aims to boost this to 100,000.

The Union Cup is one of many LGBT sporting events held around the world.

The Gay Games, held like the Olympics every four years, is seen as the pinnacle of LGBT+ sports and athletics, with many smaller-scale sporting events, ranging from football to netball, held at an international and regional level.

Forty-five teams will compete over the two-day biennial Union Cup, with more than 1,500 players participating from 15 countries across Europe.

Launched in 2005, the tournament started “like a camping weekend away” with just seven teams, said Richie Fagan, captain of the Dublin-based, Emerald Warriors squad, and chairman of the Union Cup.

A decision was taken at the 2017 competition in Madrid to launch the women’s tournament.

“It has taken a while and that just shows there isn’t enough credibility given to women in sport”, Fagan said.

“We’ve championed equality (in Ireland), so we thought we had to bring on the women’s part of the tournament, especially because of what women have done for (the LGBT+ community) in this country”.

← Warsaw: Pride parade attracts large crowd amid heated political debate
US: Buttigieg – ‘No going back’ in fight for LGBTQ rights →