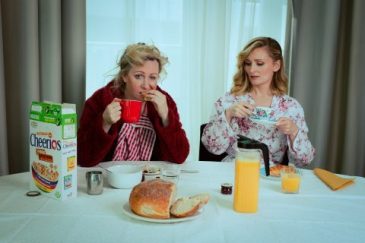 The Everyman’s production of  Neil Simon’s The Odd Couple opens for a Summer Season on Tuesday next, July 16, and continues until Saturday August, 17 , excluding Sunday and Mondays. This is one of Simon’s best loved plays and it’s so good he wrote it three times: A version for two men, and version for a man and a woman and this version, which is for two women, so let the Everyman introduce you to Florence and Olive.

Set during a warm sticky New York summer in an apartment on the Upper West side, laid back Olive Madison, played by Gillian McCarthy, is hosting ‘the girls’ for their weekly game of Trivial Pursuit  when her friend, highly stung Florence Unger, played by Nichola MacEvilly, freshly separated from her husband and nowhere to go, arrives. Fearful of Florence’s state of mind, Olive invites her to move in as her roommate – however – Olive and Florence have very different personalities. Olive’s easy going outlook on life soon clashes with Florence’s highly strung, neurotic tendencies, testing their friendship to the limit. When Olive organises a double date with the Costazuela brothers, played by Ray Scannell as Manolo and Kevin Creedon as Jesus, their differences come to a head and sparks fly.

The Odd Couple is the epitome of quick witted, laugh a minute, humour. This production is a fresh look at a familiar set up, and tv shows like Friends owe a huge debt to Neil Simon’s comic genius. Directed by Conor Hanratty, and also featuring Noni Stapleton as Mickey, Gene Rooney as Vera, Camille Ross as Sylvie, and Éadaoin O’Donoghue as Renee, with set and costumes by Maree Kearns, and lighting design by Kevin Smith.

Neil Simon’s The Odd Couple opens at The Everyman, Cork, on Tuesday, July 16, and continues until Saturday, August 17, nightly at 7.30 (except Sundays and Mondays). Tickets for the opening week are priced at €26 and students are €9.