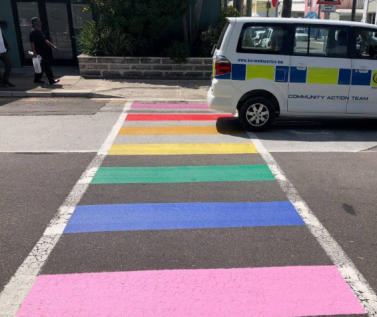 Bermuda stages its first Pride parade on Saturday, as the conservative island wrangles over gay marriage in the courts, and marchers face religious protest on the streets.

Homosexuality is legal in Bermuda – a prosperous financial centre in the Atlantic Ocean – but activists say the island’s LGBT+ community faces widespread homophobia.

Hundreds of marchers are expected to congregate on the sunny streets of the volcanic Atlantic island for all-day festivities, with parade-goers expected to run a small gauntlet of religious opposition en route.

The government of the autonomous British Overseas Territory – already managing deep divisions over legalising gay marriage – appealed for peace at the parade, after threats of violence ran on social media platforms.

“Bermuda is a country with diverse opinions, ideologies and a history of strong spiritual convictions. We encourage everyone to be mindful of the diverse perspectives on our island and to seek peaceful, respectful and law-abiding means of expressing points of view,” Bermuda’s acting premier, Walter Roban, said in a statement to the Thomson Reuters Foundation.

Banners with homophobic slogans were hung in the small northwestern village of Somerset, ahead of Bermuda joining more than 60 countries to hold a Pride parade this year.

Police urged protesters to object inside the law.

“There are some pockets of negative comments. I respect that people are entitled to their views and opinions,” Police Commissioner, Steve Corbishley, told the Thomson Reuters Foundation.

But he added: “I won’t tolerate…views that express hatred towards a group of people that form a basis of a criminal offence or is abusive.”

Corbishley said he would join the parade to show solidarity with marchers, as well as Bermuda’s LGBT+ police officers, with one in 10 of his force working the route to maintain peace.

Bermuda – the most populous British overseas territory with some 65,000 inhabitants – legalised same-sex marriage in 2017, although parliament later banned it, leading to a protracted and ongoing court battle.

An appeal by Bermuda’s government will be heard in London’s Judicial Committee of the Privy Council – the highest court for British Overseas Territories, which are self-governing jurisdictions with their own constitutions and parliaments.

A date has not been confirmed for the hearing and it is unlikely to be this year, a spokeswoman for the Privy Council told the Thomson Reuters Foundation.

Gay marriage supporters have said the case in Bermuda, which lies off the US East Coast, could set precedent for British territories in the Caribbean that outlaw same-sex marriage.

Organisers said Saturday’s parade was about far more than gay marriage, however emotive that debate.

“It’s about recognising the value of Bermuda LGBTQI+ community and creating a safe space for people to be themselves,” said Chen Foley, one of the event organisers.

Fellow organiser Liz Christopher, a defence barrister, said fears for a negative reception to the parade had been overblown.

“The community reaction has exceeded expectation. There’s certainly a segment of the community that is not happy with Pride, but that’s okay. The event isn’t for them,” she told the Thomson Reuters Foundation.

Police have designated three spots on the route for protest, although opponents are free to congregate where they wish.

Most opposition has come from religious groups, such as Shekinah Worship Centre, a non-denominational, Pentecostal church, based in Hamilton parish, in northwest Bermuda.

“Sadly, many now want to add to and take away from that which God calls sin,” she said.

Seaman pointed to a 2016 referendum on legalising gay marriage that was rejected by 69% of voters, saying:

“The vast percentage … did not want to have same-sex marriage.”

On the eve of the parade, Agape Faith Kingdom Ministries, a non-denominational church in Somerset, said it planned to hold a pray-in at the start point, before walking the route in prayer.