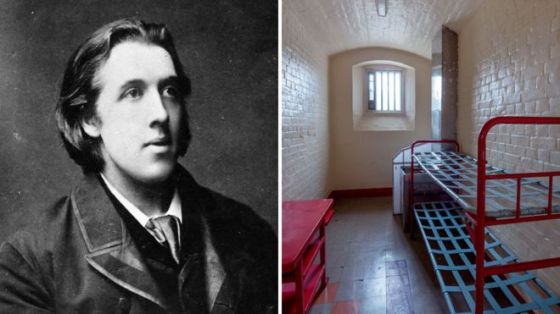 Campaigners had hoped to turn the austere brick prison, which lies just west of London, into an arts centre, to preserve a site of gay pilgrimage and honour Wilde’s literary legacy.

“We are losing heritage and cultural spaces to commercial redevelopment which will never be recovered.”

Reading Gaol housed the Irish poet and author – whose homoerotic writing shocked Victorian Britain – for most of the two-year sentence he served for gross indecency.

During the sensational trial, he was questioned over his relationship with Lord Alfred Douglas, a poet who penned the immortal line:

“I am the love that dare not speak its name”.

The prison closed in 2014, but has since hosted arts events, including a reading of his work by actors and musicians, such as Patti Smith and Rupert Everett.

The prison became a magnet for Britain’s LGBT community, just as New York’s Stonewall Inn draws crowds commemorating its key role in the US fight for gay rights.

It is the latest prison to be sold by the government, as it seeks to turn state assets into money to bolster its budget.

Britain’s Justice Ministry said it would invest money from the sale back in the prison system, and would consider all bids.

“We will always seek the best outcome for the taxpayer,” the ministry said in a statement.

Paul Johnson, Professor of Sociology at the University of York, said that Britain had a bad record of marking its historic persecution of gay people, and that the prison was important to many people around the world.

“It does crystallise what hundreds of thousands of people suffered, it isn’t just about one person – its about what so many people suffered over time,” he said.

In July, Britain announced plans to honour Alan Turing, a code-breaker, who helped the Allies win World War Two, but who committed suicide after being convicted in 1952 for same-sex relations.

Wilde was imprisoned in 1895, months after his play, ‘The Importance of Being Earnest’, was first performed in London, and his case threw a spotlight on Britain’s draconian laws on homosexuality.

He wrote ‘The Ballad of Reading Gaol’, inspired by the hanging of an inmate, a poem that made it one of the most famous prisons in the world, according to the Oscar Wilde Society.

“In Reading gaol by Reading town, There is a pit of shame, And in it lies a wretched man, Eaten by teeth of flame,” the poem reads.