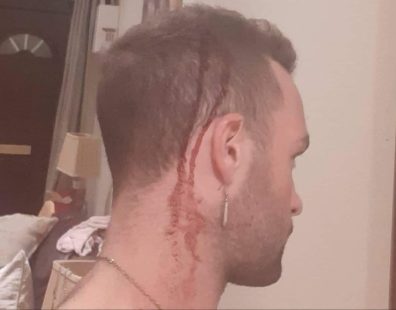 Graham Halley at home shortly after the attack

A young gay activist has spoken out about the need for education, following a horrific attack on Dublin Streets in the early evening. Graham Halley (25) was walking on Dublin’s O’Connell Street on Thursday, 26th September, when he was set upon by a gang of six. As he explains:

“I was walking home after visiting a friend. It was early enough – around 8.20pm in the evening. I was on the phone to another friend, when I felt myself poked by something that turned out to be an umbrella. I turned around and there were six people, all men in their early 20s I would say. I had passed them hanging around outside a fast food outlet, and they obviously followed me. They just started saying really vile and disgusting things to me.”(Graham has told us what they said, but we are omitting it lest some people find it triggering). 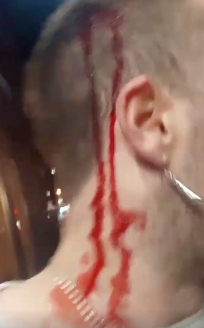 Graham on the street moments after the attack

“I was stuttering at them asking them why they were doing this, and what were they doing, while I was looking around to see if there was anyone nearby. There was one guy very much leading the whole thing – the one that poked me with the umbrella – and the others were just following his lead. I could see people, and they were close enough to see what was happening, but they all just ignored it. I was so shocked I didn’t even notice the back of the umbrella hitting me.”

Video link to a very emotional Graham speaking just after the attack:

[Please note there will be a slight delay on the video beginning – Ed.]

The attack left Graham bleeding heavily from the back of his head. Asked why he thinks they targeted him, he doesn’t hesitate before saying:

“The way I look”. And unfortunately he has previous experience of situations like these, having been accosted twice in the space of a month prior to this.

“I don’t want to generalise,” he said, “but it was exactly the same demographic each time. The other two times they were just verbal attacks, but there’s definitely a culture there amongst that type of youth or young man. I’ve seen other incidents where they would push into elderly people, or get abusive towards people, and it’s just astonishing that they are allowed to get away with it.”

In the aftermath of the attack, Graham approached a woman on the street to see how bad the bleeding was to the back of his head, but she didn’t want to get involved. He admits the apathy of the bystanders was frustrating, although he was fortunate enough that there were two Gardaí nearby, and one approached him about the assault. Having given them a full description, they have since been in communication with him, and seem to be following it up. However, Graham feels that this is not enough.

“I was lucky in that the injury wasn’t as bad as it looked initially. But between these young men who are committing these acts, and the people doing nothing, I am convinced that one of the main problems is a lack of education. They seem to be ignorant to the fact that the world is made up of lots of different types of people, and completely intolerant to anyone who doesn’t fit their mould.”

Despite his ordeal, Graham is surprisingly understanding of his attackers perspective, however, saying:

“I do think we don’t know what they were going through – what has happened in their lives to make them like that. Obviously I don’t condone what they did, but I do feel that we need to consider their situation as well.”

Describing himself as an actor, writer, and activist, Graham, who originally hails from Tipperary but now lives in Dublin 8, has vowed to help educate others about tolerance and acceptance.

“The whole experience has empowered me. It has made me see that there are plenty of people who practise love and acceptance. But I’m going to use this experience to educate others any way I can – maybe devising a work to tour in schools. Whatever way that I can, I will be teaching this.”

Asked if he is concerned that he might face obstacles in his efforts, he defiantly states:

“They won’t stop me trying, whatever they put in my way. The thing is that this isn’t just an LGBTQ thing, and the person stopping me might just be the unlucky person who gets targeted next.”

(If anyone has any information on the attack, please notify the Gardaí at Store Street on 01-6668000, or any Garda Station, to help with enquiries).