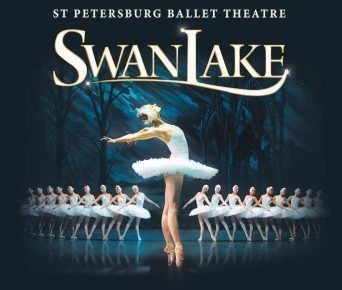 Tickets from €31 (Although this is advertised, at time of writing the cheapest seats seemed to be in the €70 mark)

Even if you have never been to a ballet in your life, chances are that you are somewhat familiar with Swan Lake. It is not an exaggeration to say that – perhaps along with The Nutcracker – it is the most recognisable ballet in the world, hence productions are put on so frequently.

This particular one is the acclaimed St Petersburg Ballet Theatre’s take on the tale. In their first-ever visit to Dublin, they have collaborated with the RTÉ Concert Orchestra, who tackle Tchaikovsky’s famous music, to present a classic take of the ballet, which was devised by Marius Petipa and Lev Ivanov in the nineteenth century.

For those who may not be familiar with the story, it tells the tale of Prince Siegfried, who falls in love with a beautiful woman called Odette. However, she is cursed to spend her days as a swan, and only reverts to her human form at night-time. Unhappy with her dalliance with Siegfried, the evil Rothbart, who is responsible for the curse, attempts to have Siegfried fall in love with his daughter, Odile, the Black Swan, instead. Ultimately, the two men have a showdown for Odette’s soul, in one of the most famous finales in ballet.

On the night I attended, the company’s Prima Ballerina, Irina Kolesnikova, was dancing the dual role of Odette and Odile. She was absolutely magnificent, bringing a pathos and grace to Odette, while instilling a devious darkness in Odile. When she danced she was truly mesmerising.

Seigfried was danced by Alexander Volchkov from the Bolshoi Ballet, who is guest-starring with the company. I didn’t immediately warm to his performance, but by Act 2 he had fully settled into the role, and made a magnificent partner for the scenes with Odile. One of the absolute stand-out dancers was Sergei Fedorkov as Jester, who was completely enchanting as he skipped about the stage, and whose comic timing delighted the audience.

Of course throughout, the main performers are supported by the company’s Corp de Ballet, who all dance in unison to create a breath-taking backdrop. However, it has to be said that a couple of the dancers did seem somewhat out of sync at times. A minor quibble, but one that once you noticed it, you couldn’t unsee. For review purposes, I put this down to opening night nerves, and the briefest of rehearsals with the orchestra, as these are world-class dancers, and I am certain this was out of character.

The staging is as grandiose as you would expect from a ballet of this scale. I was unsure how such a classic piece would work in a contemporary theatre like the Bord Gáis, but it felt surprisingly at home there, and the transformation of the stage was astonishing. The costumes were also stunning, and flowed beautifully as the dancers performed. If I had one other quibble, it would be that some of the lighting choices didn’t quite work. The blue gels, used to give the effect of Odette dancing on the lake, sometimes made the beautiful Irina look a bit harsh. However, again that is a minor quibble.

The enchanted audience leapt to their feet at the end of the performance, and gave the company one of the most enthusiastic standing ovations I’ve seen in a long time. General consensus as we left the theatre was that this was a magnificent show.

It should be pointed out that the principal roles will be shared by other performers during the run, so you may see a different interpretation of the choreography than I did, as each dancer will put their own individual stamp on it. But whoever is dancing the role when you attend, this is a rare chance to see a world-class Russian ballet company on your own home turf, and one that should not be missed.