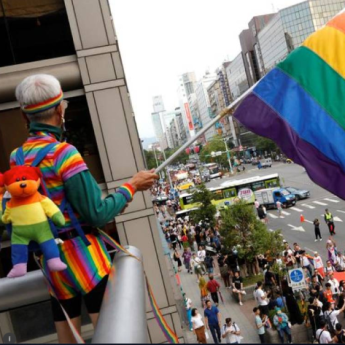 A participant on a balcony during the LGBT Pride parade in Taipei, Taiwan October 26, 2019 – Image: REUTERS/Eason Lam

(Reuters) – More than 100,000 people thronged the streets of Taiwan’s capital, Taipei, on Saturday, for East Asia’s largest Pride march, months after the self-ruled island began formally allowing same-sex marriage, the first place in Asia to do so.

Proudly democratic Taiwan is a bastion of liberal values, in a part of the world where in many countries homosexuality remains illegal.

Since legalisation on May 24, more than 2,150 same-sex couples have married in Taiwan, government data shows.

Organisers say more than 200,000 people marched through the streets of Taipei, in a parade that ended in the evening outside the Presidential Office.

Chi Chia-wei, an activist who brought a case to Taiwan’s constitutional court that led to a landmark court ruling on same-sex marriage in 2017, told Reuters that everyone was extremely happy.

“We used to be worried and fearful, but we have accomplished it, so we are all joining the Pride parade with joy,” he said, while standing on a balcony waving a big rainbow flag to the crowds below.

President Tsai-Ing-wen and her ruling Democratic Progressive Party have supported the event.

“We hope you have your glad-rags on, because this year’s celebration should be a special one after the passing of #SameSexMarriage legislation, with over 200,000 people expected to attend from all over the world!” Taiwan’s Foreign Ministry wrote on its Facebook page.

Tony Ho, a 23-year-old graduate student, said he’d like to thank Tsai for delivering on her promise of marriage equality.

“I’ll vote for her. She guards Taiwan’s sovereignty and supports the gays. Thank you!” he said, carrying a sign that read “only vote for Tsai Ing-wen in 2020”, a reference to January’s presidential election.

Same-sex marriage remains illegal in Taiwan’s giant neighbour, China, which claims Taiwan as its sacred territory, and has never renounced the use of force to bring the island under Beijing’s control.

“Taiwan is an independent country with an advanced civil society and a liberal environment. That’s completely different from China,” said Peng Yuhao, a 24-year-old sales representative.

A small group shouted their support for anti-government protests in Hong Kong, which have roiled the former British colony for the last four months.

Still, same-sex marriage has not had an easy ride in Taiwan.

Late last year, Taiwanese voters opposed same-sex marriage in a series of referendums, defining marriage as being between a man and a woman in civil law.

← Interview: Anti-gay law ‘like a gun pointing at us’ says eSwatini activist
Listen: Payson Lewis – Nothing To You →