Report on the #RENEWIESOGI Process is here 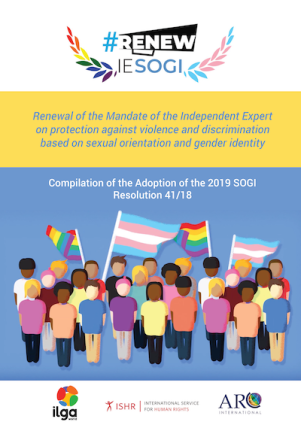 In July 2019, States voted to renew the mandate of the United Nations Independent Expert , focusing on the protection against violence and discrimination on the basis of sexual orientation, and gender identity (SOGI) for a further three years.

It was a historic victory for LGBT communities, and for human rights for all: following the call from a record number of 1,312 organisations from 174 States and territories, the UN Human Rights Council reaffirmed its commitment to combatting discrimination and violence, and reminded all States of taking action to ensure all people are safe.

ARC International, ILGA World and ISHR have compiled a report setting out the key statements, documents and outcomes of the adoption of the Resolution 41/18 that renewed the mandate of the Independent Expert that was created in 2016. The three organisations want to acknowledge the work of Gabriel Galil who transcribed the entire proceedings.

Reading these pages will allow you to follow the steps in the process that led the Human Rights Council to #RenewIESOGI. Human rights defenders around the world advocated for the adoption of the resolution introduced by Argentina, Brazil, Chile, Colombia, Costa Rica, Mexico and Uruguay. During the process, we witnessed States across the globe coming together to reject ten hostile amendments introduced by members of the Organization of Islamic Cooperation (OIC), except for Albania and Tunisia. All ten amendments were voted down and rejected, one by one.

In the end, 27 States voted in favour of the renewal of the mandate with 52 States from every region of the world co-sponsoring the resolution; 12 voted in opposition, and 7 abstained. These record-high numbers signal a shift: it is reassuring to witness that the international community is becoming both more aware and less tolerant of violence and discrimination on the basis of SOGI!

The analysis of the vote – summarised in this report – discusses the changes seen in the positions of regional groups towards the resolution, and captures statements made by Governments, which reveal their respective commitments to creating a safer world for people of diverse SOGI. Overall, the positive and constructive tone of the debate showed significant progress from the situation in 2016.