Turkey: Judge refuses to throw out trial of Pride marchers 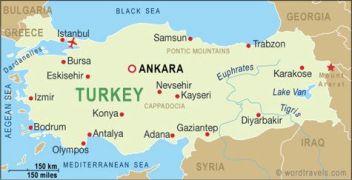 A Turkish court on Tuesday rejected calls to throw out the trial of 19 people for participating in an LGBT+ Pride march on a university campus.

Most of the 18 students, and a faculty member from the Middle East Technical University (METU) were charged with “refusing to disperse”, after being arrested at a May 10 Pride march by police using pepper spray, plastic bullets, and tear gas.

The trial highlights ongoing limits on LGBT+ events in Turkey. After a 2016 coup attempt, local governments were given the power to ban public gatherings, which authorities across the country have used to outlaw Pride marches.

Defence lawyer, Oyku Didem Aydin, demanded the immediate acquittal of the defendants, while standing before coloured case files arranged to create a large rainbow on her desk.

“The images in the indictment only show students using their basic rights and freedoms,” Aydin told the court. “There’s no resistance to police.

“The defendants are on trial for freedom of expression, for their freedom of assembly. No one should face such a thing.”

Homosexuality is legal in Turkey, home to a diverse LGBT+ community, that includes refugees who fled neighbouring countries, including Iran, where they can be sentenced to death.

Pride marches have been repeatedly banned in recent years, and being lesbian, gay, or bisexual is often equated with a lack of morality.

Turkey was second last out of 49 European countries for LGBT+ rights protections, in 2019 rankings compiled by ILGA-Europe.

Earlier this year, an Ankara court reversed a ban on LGBT+ events, that had been imposed by the local government in November 2017, but METU’s rector had refused to permit the march on the university campus.

One student was charged with “insulting” authorities with hand gestures, which carries a prison sentence of up to two years. Others were prosecuted for “refusing to disperse”, and face between six months and three years in prison.

“We were trying to continue our peaceful march,” Melike Irem Balkan, a METU student, told the court during her defence.

“We’re struggling against a society that wants to determine who we can love, our bodies and sexuality,” she added.

The METU rector and the Ministry of Justice did not respond to requests for comment.