(Reuters) – Police are investigating allegations of homophobic chanting by some West Ham United supporters, during their team’s 1-0 Premier League win at Chelsea on Saturday, the BBC has reported.

Official LGBT+ supporters’ groups of both clubs — Pride of Irons and Chelsea Pride — said on Twitter that they had witnessed continuous discriminatory chanting, directed towards Chelsea fans at Stamford Bridge, and reported it to West Ham.

The BBC said on Monday that the Metropolitan Police were contacted on social media, and are conducting enquiries. No arrests have been made yet.

West Ham issued a statement on Monday saying they do not condone any discriminatory behaviour by supporters.

“West Ham United in no way condones any behaviour that falls short of the highest standards which the club sets when it comes to equality,” a club spokesperson told Sky Sports.

“At London Stadium against Arsenal on Monday, we will be celebrating and demonstrating the great work the club does to create a welcoming and inclusive environment for ALL supporters, including our LGBT+ fanbase, as part of our ongoing and unwavering support for the Rainbow Laces campaign.”

Football equality body Kick It Out tweeted here that it had told the FA the chants were homophobic and had to be treated as such. 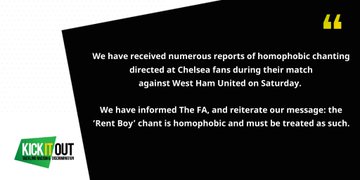 Tackling anti-LGBT slurs is vital to make sport more inclusive. Incidents like this are a reminder of why the #RainbowLaces campaign is so important.

We need everyone who loves sport to play their part and make sport everyone’s game! https://www.google.co.uk/amp/s/www.independent.co.uk/sport/football/premier-league/west-ham-supporters-homophobic-chelsea-sing-chants-kick-it-out-rainbow-laces-a9227821.html%3famp …

Professional players across Britain will help promote equality and diversity during the next two rounds of games, as part of the Rainbow Laces campaign here, including using rainbow-coloured captain’s armbands and laces.
-Shrivathsa Sridhar in Bengaluru