Colombian Claudia Lopez, the first openly gay woman to be elected mayor of Bogota – and of any capital in the Americas – has married her girlfriend, just weeks before taking office.

The centre-left politician, known as an anti-corruption crusader, on January 1 becomes Bogota’s mayor, a job regarded as the most powerful political post in Colombia, after the presidency.

“I love you my divine Angelica! Thank you for existing and for always loving me,” the 49-year-old Lopez wrote on Twitter.

“Thank you all for sharing our happiness and for your good wishes!”

Wedding photos of the pair dressed in white pant suits were shared widely on Twitter as well: 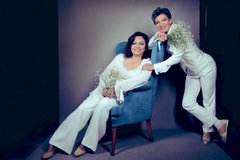 10.3K people are talking about this
While the majority-Catholic nation of Colombia remains a socially conservative country, legal gains have been made to promote LGBT+ rights in recent years.

Laws passed since 2015 allow same-sex couples to marry and adopt children. Transgender people can change their names on identity cards.

During her campaign, Lopez, a left-wing former senator and presidential candidate, did not focus on LGBT+ rights or her sexuality.

Instead she pledged to fight all forms of discrimination and inequality suffered by Colombians in the capital city of seven million people, address the high levels of violence against women and children, and improve access to education.