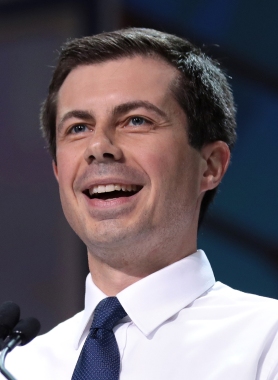 (Reuters) – Pete Buttigieg is betting big on Iowa and New Hampshire, hoping success in the largely white states will help him overcome dismal support from black voters by the time more diverse states weigh in on his bid for the presidency.

Buttigieg’s most recent swing through South Carolina, the first state with a large black population to hold a primary, underscored the depth of his challenge with the critical Democratic voting bloc.

Amid campaign stops designed to put Buttigieg before black audiences, the white, openly gay, former mayor of South Bend, Indiana, faced continued questions about his record on race, his ability to earn black voters’ trust, and his sexuality.

“For many people, they believe their God won’t let them support him.”

Buttigieg, 38, has spent the last year successfully courting Democratic donors and voters in the predominantly white states of Iowa and New Hampshire, where polls show the Harvard-educated, military veteran in the top tier of candidates a week before Iowa’s February 3 caucuses.

But a lack of black voter support could doom his White House chances.

A national Washington Post-Ipsos poll this month showed Buttigieg with just 2% support from Democratic black voters nationally, far behind former Vice President Joe Biden’s 48% and US Senator Bernie Sanders’ 20%. In South Carolina, where roughly 30% of the population is black, Buttigieg has remained in the single digits.

Buttigieg lacks the national profile and long-standing relationships with the black community that have boosted Biden. His recently ended tenure as mayor has come under scrutiny, including a lack of diversity on the local police force, and a fatal shooting of a black resident by a police officer.

He has tried to confront those concerns head-on. Buttigieg named black employees to key positions on the campaign, and released a detailed policy proposal – dubbed the Frederick Douglass Plan, named after the 19th-century abolitionist leader who was born into slavery – that would send more federal money to black colleges and black-owned businesses, said Hasoni Pratts, the campaign’s national engagement director.

On Monday, the campaign announced endorsements from three state officials, including the first black mayor of the small town of Anderson.

Yet at an event last week at Claflin University, a historically black college in Orangeburg, South Carolina, Buttigieg said most of his campaign events in the state still lacked diversity.

“I’ll be honest, it’s mostly white people showing up,” Buttigieg said. “In order to win, in order to deserve to win, I need to be speaking to everyone,” he added.

Larry McCutcheon, a 69-year-old black pastor, said he was open to voting for Buttigieg, and gets angry at the portrayal of blacks as homophobic. Looking at some empty seats in the university hall, McCutcheon said the bigger issue was that Buttigieg’s message had not resonated with enough black voters in the state.

“You can see just from this event that he has a problem,” McCutcheon said.

Buttigieg’s campaign blames his sluggish poll numbers on black voters’ lack of familiarity with the candidate, who did not have a national profile before entering the race. As that changes, so will his poll numbers, the campaign says.

In a phone interview, Pratts said the campaign had been the victim of a “false” narrative that had “spiraled out control” about Buttigieg’s handling of race issues during his tenure as mayor.

She said Buttigieg would keep showing up at events with black voters and answering tough questions.

“I get this is an ongoing process of earning trust,” Buttigieg said in Orangeburg.

“I get that, as a new guy, I don’t have decades worth of experience with folks around the country. We have our story of our city, which is good, bad and indifferent.”

Afterward, Delanie Frierson, 66, said it was unlikely she would vote for Buttigieg in South Carolina’s February 29 primary. She believes he has falsely equated gay rights to civil rights, a comparison she describes as insulting.

“Pete can walk into a room and no one will know if he’s gay,” she said.

“A black person can’t do that.”