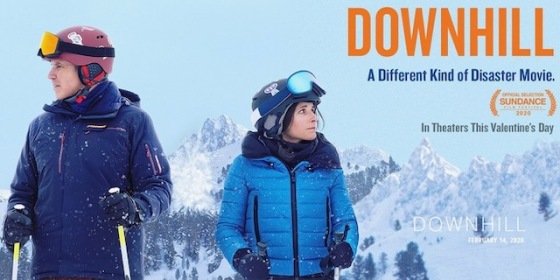 Downhill is a remake of the award-winning acclaimed 2014 film, Force Majeure, by Swedish director, Ruben Östlund. Hollywood really has a thing for remakes and reboots at the moment (please someone come up with an original idea!) with the thinking obviously being that taking a tried and tested formula, and throwing some much-loved and well-known stars at it, will result in a guaranteed hit.

The much-loved well-known stars in this case are Julia Louis-Dreyfus and Will Ferrell, who play married couple, Billie and Pete Staunton. While on a ski vacation with their two sons, they find themselves in the midst of an avalanche, but rather than protect his family, Pete makes a run for it (to be fair I’d do the same, but I don’t have children).

Everyone survives, but his cowardly actions throw the family into crisis, as the couple are forced to re-evaluate their relationship.

As you may have gathered, despite the comedic talents of the leads, Downhill is not a laugh out loud offering. Overall, it is a relationship drama. Indeed, Louis-Dreyfuss has one excellent monologue, where she describes exactly what she was feeling as her husband left his family to possibly die.

She is brilliant throughout, and Ferrell is better than you would expect, but, on occasion, does feel the need to veer the wrong side of whacky, which doesn’t really suit the material. His efforts aren’t helped by the fact that the script is completely hit and miss, and the writers have felt the need to try and pepper it with the kind of puerile humour that we usually expect from Ferrell.

Indeed Miranda Otto’s character Charlotte verges on pastiche, and it is only her wonderfully restrained performance that prevents her scenes becoming ridiculously OTT.

However, they do handle the avalanche scene beautifully, as everyone simply stays where they are, videoing it on their phones, rather than running away from impending danger. It is very reflective of modern society (think of all the people you see standing in the middle of dangerous storms to film the destruction) and a nice touch.

And, on the whole, visually this looks wonderful – but with such a gorgeous snowy backdrop, why wouldn’t it? There are some beautiful vistas, and super stylish skiing shots.

Thankfully, Downhill doesn’t outstay its welcome, clocking in at just under an hour and a half, as I got the feeling that the premise had run out of steam about 20 minutes beforehand.

Despite the fabulous talent on offer, Downhill never quite reaches the peaks that it should, and the moments of greatness are not enough to elevate it from blandness. It never feels like it reaches the emotional crux of what would be a very devastating experience for anyone.

This doesn’t quite go completely downhill, but it’s never as good as it should be, and leaves the viewer somewhat dissatisfied.

In Cinemas February 28th! Trailer below: