Posted by EILE Magazine on February 27, 2020 in Culture & Arts, Reviews 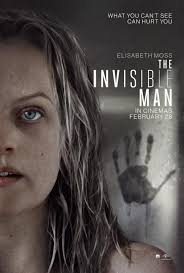 Back in the 30s and 40s, no one did a creature-feature better than Universal, and I am a huge fan of their classic monster movies.

While they made an attempt to revive their horror legacy in recent years, it has proved disappointing – I’m not alone in thinking this, as the movies received mainly negative responses. However, for this offering, they have taken a step back from the idea of a shared cinematic horror universe, and, as such, this is a stand alone movie that is not connected in any way to their previous efforts.

Moss plays Cecilia, who is in an abusive relationship with her millionaire scientist husband, Adrian (Jackson Cohen).

In fact, the first fifteen minutes of this involve her escape from his clutches. She hides out in the home of her childhood friend, James (Hodge) but when her sister, Alice (Dyer) informs her that Adrian has killed himself, Cecilia thinks she can finally move on – especially in light of the fact that he left her a substantial chunk of his fortune.

However, no sooner has she signed the papers to receive the money, than she begins to experience strange phenomena at the hands of an unseen force. Although she is convinced Adrian faked his own death, and is stalking her, no one else believes her, and with the lives of everyone she loves in danger, and her own liberty and sanity at risk, she has to desperately try to prove her theory is correct.

Firstly, I have to say, this should come with a trigger warning, and may be upsetting for anyone who has experienced domestic abuse or trauma. For much of this film, Cecelia is terrorised both mentally and physically, and it is often uncomfortable to watch.

Moss plays it brilliantly, especially when you consider she is often acting against thin air, which only serves to make it all the more uncomfortable. But that doesn’t detract from the fact that it is somewhat disturbing.

Moss is in almost every scene, and definitely earned her paycheck for this movie (can someone please cast her in a nice rom-com or something, as I’m sure she is sick of being tortured and abused on screen). Like the song says, she works hard for the money.

The rest of the cast don’t get much of a look-in, but all do a good job. You have to feel for poor Jackson-Cohen though. He may play the titular character, but we don’t see much of him on-screen (the clue is in the title if you are wondering why).

Writer and director, Whannell’s appreciation and affection for classic horror practically seeps off the screen. He builds atmosphere wonderfully, and utilises plenty of old-school techniques to make the audience jump.

Yes, there is obviously some CGI here, but it is not over-utilised, and appears almost seamless. One of the twists (yes, there are a few) you can see coming a mile away, but on the whole, this is a surprisingly intelligent script, given it’s fantastical subject matter.

When a story has been told as often as this one has, it’s difficult to keep it fresh, but this really does give the tale a new lease of life. Like all movies in this genre, it does have one or two extremely silly moments, and you are asked to suspend a lot of belief.

But it is very engaging, extremely suspenseful, and has moments to shock even a hardened horror fan. As I said, abuse victims or anyone suffering trauma may find this triggering, but for everyone else, it should prove a suitably heart-stopping monster-movie experience.