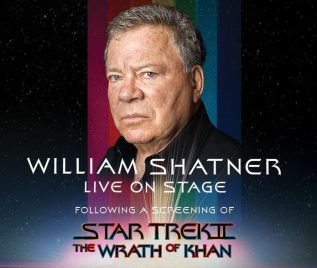 William Shatner needs no introduction. As a pop culture icon for over five decades, most people have encountered his work at some point. In recent years, he has gained a whole new cult following, thanks to his witty and pithy Twitter postings, which could almost come straight out of one of his more recent shows $#*! My Dad Says.

However, despite an illustrious and lengthy CV, undoubtedly his best-known and career defining role was that of Captain James T Kirk in Star Trek, and it is mainly that which he focuses on during this live experience.

Preceded by a screening of the 1982 classic Trek movie, The Wrath of Khan (the second movie in the Trek big screen franchise) he arrives on stage to a standing ovation. Clearly thrilled, he comments that it’s difficult walking out when people have spent two hours looking at a 35-year-old version of him.

Introduced by Today FM DJ, and front man of Something Happens, Tom Dunne, this was not your usual Q&A or “An Audience With…” format.

Dunne may have been there to moderate, but this was Shatner’s show. As Tom dutifully took his seat on stage, the audience were treated to the first of many hilarious and energetic anecdotes from the legendary star, who insisted on explaining where the film sat in the Star Trek canon. Working the stage excitedly, he appeared decades younger than his 88 years, and his exuberance for his most famous role was in no doubt.

This was just as well, as it appeared the audience was predominately made up of Trek fans, which became apparent when Tom managed to get a word in edgeways, and ask some of their pre-submitted questions (“Boxers or briefs?” – only in Ireland!).

These were merely tools to allow Shatner to launch into yet another story though, and his answers went on more tangents than the current negotiations between our various political parties as they try to form a government.

Not that the audience were complaining. They hung on his every word, lapping up his tales and name-dropping, and laughing out loud throughout. He even had a heckler who tried to get his attention, which he handled with aplomb.

Tom Dunne had the easiest gig of his career, as it was apparent that Shatner was not for reining in. He clearly had several rehearsed stories that he wished to share, and managed to completely control the direction of the evening, despite Tom’s best efforts. When he left the stage (to another standing ovation) after an hour, there was visible disappointment in the auditorium, with some people commenting that they could have listened to him all night.

In fact, the queue for his merchandise was enormous as I left – despite most of it being extremely expensive. While a T-shirt was €35, a book was clocking in at €60, and a vinyl copy of his 1968 album, The Transformed Man, was €120. But fans clearly wanted to bask a bit longer at the altar of their hero, and needed a memento to do so.

There are few people that deserve the title ‘living legend’, but William Shatner proved that he was totally worthy of it. He didn’t disappoint, and left the crowd wanting more – which is clearly why his career has endured for so long.

For most attendees, this was a once in a lifetime experience, and one they will no doubt be talking about for some time to come.