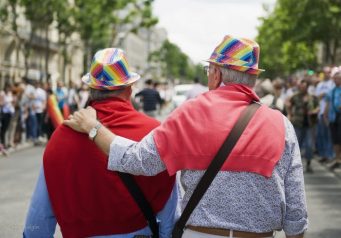 As lockdowns are imposed around the world to stop the spread of coronavirus, LGBT+ groups are scrambling to support older members of their community, who are more likely to live alone and suffer from poor health than their heterosexual peers.

With community centres and other face-to-face services forced to shut from Mexico City to New York and London, volunteers are rallying around to deliver food, and to phone vulnerable elders – and even raise funeral funds.

Even before the outbreak, loneliness was more prevalent among older LGBT+ people, according to a 2016 study by The Williams Institute, a US research centre on sexual orientation and gender identity law and policy, at UCLA School of Law.

A survey it cited found almost 60% of LGBT+ elders felt they lacked companionship, with some living with HIV, and having lost partners and friends to AIDS during the 1980s and 1990s.

“Most of them live at home, and they don’t have family support networks,” said Arturo Arcos, a psychologist at Vida Alegre, Mexico City’s only drop-in centre for LGBT+ seniors, which shut last week as a precaution against the coronavirus.

“In most cases, they never had kids, and, for a lot of them, their families don’t talk to them.”

The coronavirus pandemic also dredged up traumatic memories for people who lost friends and family in the HIV/AIDS crisis.

“I lost three brothers to HIV and about five girlfriends. My sister-in-law, she’s living with (HIV),” said Diedra Nottingham, 69, who is self-isolated in her New York apartment.

“I’m a person that likes to be outside, but I’m so afraid of getting sick.”

But Nottingham, whose partner died 15 years ago, said she was lucky to have moved into an LGBT-friendly housing complex in January, where she gets food deliveries and phone check-ups.

High rates of poverty also endanger LGBT+ elders, said David Vincent, the head of programs at SAGE, the charity that runs Nottingham’s housing complex, and has had to shut its five drop-in centres in New York City.

“Discrimination has also affected their employment. As a result, they may not have the savings or pension … many folks have,” said Vincent.

“Their ability to prepare is not the same. So they are often … left in a complete crisis”

SAGE is now calling about 2,000 vulnerable older people at least every other day, and delivering 200-250 daily meals throughout the city, as well as moving everything from counselling sessions to watercolour painting classes online.

“The need is tremendous,” said Vincent.

While volunteer ‘mutual aid’ groups have sprung up in communities around the world, LGBT+ older people might not seek help where they live, said Carla Ecola, who runs The Outside Project, an LGBT+ homeless shelter in London.

“They’re probably more likely to have experienced hate-crime from their neighbours,” said Ecola, who has marshalled a group of about 120 volunteers to help LGBT+ people across the city.

“Now they’re feeling vulnerable they don’t want to link up with the mutual aid group next door.”

With other advocacy groups, Ecola is also applying for a British government grant of up to 20,000 pounds ($25,000) to establish a fund for funerals for poorer members of the LGBT+ community.

“We need to get cash together to bury our neighbours; that’s the reality of the situation,” she said.

“I know now we’re all self-isolated and in lockdown, but one thing I definitely feel is that there is a bonding, community drive. People reaching out and volunteering or helping those who are isolated and can’t look after themselves,” said Walker.

“Maybe that’ll be a positive outcome of such a difficult time.”