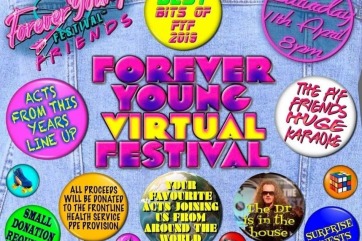 Your friendly neighbourhood reviewer is back, after what feels like an eternity. But with the world shut down, there isn’t much to review. Until now. If the mountain won’t come to Mohammed, then Mohammed must go to the mountain, as the saying goes. Well, the people at Forever Young adapted that, in light of all our current restrictions, working on the premise that if you can’t go to the festival, then the festival will come to you.

There are numerous artists doing live shows online. There’s a reason I haven’t been reviewing them. Some are a nice distraction for half an hour. Others make you wish the internet had never been invented. The problem is not many people are putting proper thought into what they are putting online in these strange times. It’s merely about keeping their name and brand above the parapet, rather than doing good work, in many cases. (To quote my friend “if I see one more celebrity in their designer kitchen telling me they are having a tough time, while giving a half-assed rendition of a song I love, I will break quarantine to go over and kill them”.)

Forever Young however definitely put thought into this, and have upped the ante for everyone. Set up as an initiative to raise funds to purchase PPE equipment for Frontline Workers during the current horrible crisis, for a mere €2, fans of 80s music, and those who just like a damn good party, were treated to four and a half hours (count it – no 30 minutes of filler material here) of fabulous acts, who have previously graced their festivals stage alongside a few that are due to grace it at the coming festival in July (social distancing advice pending).

What’s hugely important to note is that this is a small festival without the budgets of the likes of Sir Elton John, who recently organised an online concert, and they had never attempted anything like this before..

For those of you not familiar with Forever Young, it is an 80s-themed festival, so all the acts here were legends of that era. Resisting the temptation to just play lots of videos of last year’s festival (which probably would have kept music fans happy anyway) organisers contacted acts who all jumped on board wholeheartedly.

All did amazing intros to their songs, with some then presenting a pre-recorded performance from another festival or show (happier and less social distancy times). Some decided to just do their performance live.

One of last Summer’s highlight acts, Jimmy Sommerville, had an Easter Bunny moment that had to been seen to be believed, before getting everyone to sing along with him while he did backing. Punk legend, Hazel O’ Connor, took the opportunity to debut an amazing new song.

Other acts getting involved included Nik Kershaw, Clare Grogan, Carol Decker, Cry Before Dawn, Toyah Wilcox, Mark King of Level 42, Limahl… Basically, I don’t have a word count large enough to mention them all. They all offered (non patronising) messages of support, and said how they were coping with isolation. It was lovely to hear that basically in lockdown all these amazing artists are doing what we’re all doing – cleaning and eating too much and trying to stay sane.

The legendary Clive Jackson, aka The Doctor from Doctor and the Medics, was the MC for both Forever Young last Summer, and their Winterfest, so it was only fitting that he somewhat oversaw proceedings, popping in to have the bants and share his stories (alongside his crocheted mini me, which is a whole other review) while also encouraging people to sing along and cheer. He was ably supported by festival founder, Sharon Alston, who, with her team, pulled all this together. The biggest awwwwwwws of the night were split between when she brought her son on camera and later her dog (they were both super cute – don’t judge the awwwwwwwws).

What made this really intimate was the chat that people could have alongside the show (the host site they used had a chat bar) so attendees who met through the festival were all catching up and yapping away as you would in the real world.

It sounds like a tiny thing, but during lockdown that kind of tiny touch really makes a difference, and the sheer joy some people had seeing each other (even only virtually) would bring a tear to a glass eye. It’s not possible with something like Facebook live, as the comments swirl by so fast, so this felt far more personal.

That aside, in review terms, was it any good? Well, it was magnificently curated and paced, and you could honestly feel people’s passion for this project leaping out through your screen. A few attendees seemed to have technical issues according to the chat board, and indeed I had a couple. However, I can’t say that is on organisers or if it is down to our systems being somewhat overloaded and slow at the moment, so I can’t criticise them on that.

This was probably the best €2 I have spent all year (and that includes the half portion of curry chips I may or may not have purchased on the way home from a show just about pre-lockdown. Even if you weren’t a fan of the era, it was actually impossible not to get sucked into the energy of this gig (something I never thought I’d say about a virtual event).

I can honestly say that this was the best Saturday night I’ve had in lockdown. Maybe it’s the isolation talking, but for the duration of this I felt connected with the world and the people watching, more than I have with any other gig. Maybe it’s because the artists and organisers made it so personal, and it felt like one big happy family. And that’s all you can wish for right now.

Social distancing advice pending, Forever Young 2020 will go ahead in the grounds of Johnstown House in Naas, on 10th, 11th, and 12th July, with details and line up at https://foreveryoungfestival.ie/

If you would like to see the virtual festival in (almost) its entirety, here is the link to it, but please donate what you can, as every little helps, and it’s all in a good cause, all proceeds go towards purchasing PPE equipment for frontline workers:

Forever Young Virtual Festival – to watch back follow the link below: