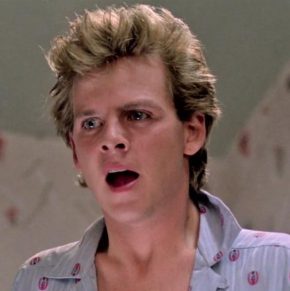 Available to rent or buy on Amazon Prime

Getting the lead role in the sequel to a huge hit movie should be the making of any actor. But for Mark Patton, beating out the likes of Brad Pitt, and Christian Slater, to secure the main part in A Nightmare on Elm Street 2: Freddy’s Revenge, was the beginning of a dark period in his life.

As the sequel to one of the biggest horror hits of 1984 (in an era when the teen slasher horror movie ruled) the movie was always going to transform his life. Unfortunately, it did so for all the wrong reasons.

Viewers were reluctant to accept a male lead, in a genre which traditionally featured a young girl kicking the bogeyman’s ass. More so, the not so subtle gay subtext literally became a stick to beat him with. If you don’t remember the movie (and I must admit it was a while since I’d seen it) it features bondage scenes in gay bars, the character’s seemingly unrequited love for his best friend, the metaphor of Freddie being ‘inside him’, and a super camp dance-scene, that he has never been able to escape… there is literally barely a scene that doesn’t scream “this is a gay movie”.

However, for decades, screenwriter David Chaskin denied that he wrote it that way, and insisted that he’d merely included subtext, which was exacerbated by the casting of Mark – something that dogged Mark further in the decades following the film’s release, and led him to harbour huge resentment towards Chaskin.

His agent, having watched the movie, told him that he could carry a film, but he couldn’t play straight. They decided to market him a character actor. This is despite the fact that he had been enjoying great success in straight roles prior to this.

The public were split between cheering for what they saw as a gay hero in some quarters, and bashing him in others. ‘He screams like a girl’ was a frequently used derogatory phrase (to be fair if that early incarnation of Robert Englund as Freddy Kruger was up close and personal with you, I’m not sure how butch any of us would scream).

The movie basically killed his career stone dead. It wasn’t helped by the advent of the AIDS crisis, when gay men were ‘personae non gratae’. And with Patton going through issues of his own, exacerbated by the stress of the NOES fallout, he stepped away from the Hollywood he had so desperately wanted a career in.

But older and wiser, he has started to make peace with his horror legacy, and after thee decades, he decided to take back ownership of the role that ruined his life. Or did it? That’s the question, as he goes on a journey of self-discovery. He embraces his Elm Street past, appearing at conventions, and reconnects with co-stars and people involved in the movie, to try and understand how the film, that should have been his breakthrough, became so detrimental to him.

It’s a very personal subject, and it’s deeply emotional in parts – not least when he finally gets to confront Chaskin about his remarks over the years. Rather than turn this into a one-sided vanity project, he bravely leaves in scenes of people berating him about what they see as his hang-up about this, and he is nothing but honest and vulnerable throughout.

At times you just want to hug him, but at other times you want to be like Cher in Moonlight, and slap him in the face and say “snap outta it” (he did actually star with Cher on Broadway, prior to NOES).

However, it is impossible not to feel for what he lost. He was literally on the cusp of having the world in his hands, and his dreams come true, when he took this role. And what he gave up by walking away only hits him very late in the proceedings.

This could easily have been an ego-trip, but it’s not. And it’s not just Mark’s story. It’s a journey through Gay history, from the 80s to present day; it’s an insight into how (still living) history affected people on the frontline in an era when the worst thing you could do was be yourself if that self was gay; it’s an insight into the fickleness of show-business; it’s a warning to anyone who aspires to get on the Hollywood treadmill. It’s also a testament to self-acceptance.

This could easily have become a “poor me” project, but Patton has ensured this is balanced, and it really is warts and all. You see his worst. You see his best. And you will get very invested in his story.

Patton is likeable, vulnerable, and the kind of guy you’d love to have a drink with. This is extremely entertaining and engaging, while also being educational. Patton isn’t the first person to be spat out by the Hollywood machine, and he won’t be the last. But to see him fighting back, and coming to terms with it, is a truly inspiring watch.

Available to rent or buy on Amazon Prime