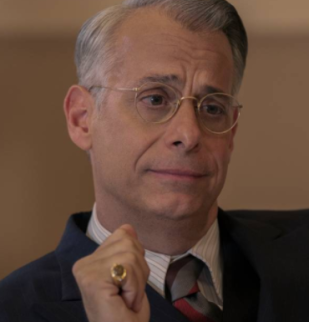 As a young gay kid in small-town Illinois, actor and director, Joe Mantello, longed to see people like himself on the silver screen.

“When you’re growing up and you don’t see yourself reflected back, it’s very, very hard sometimes to understand your place in society,” the Tony Award-winning director told the Thomson Reuters Foundation.

Some fifty years later, Mantello is getting the chance to help a new generation of young LGBT+ people see themselves reflected onscreen.

Along with a handful of other openly LGBT+ performers, Mantello is starring in the limited series, Hollywood, which premieres on streaming service Netflix on Friday, and gives 1940s tinseltown a queer twist.

Co-created by openly gay producer, Ryan Murphy, Hollywood reimagines cinematic history, visualising what would have happened if legends like Rock Hudson had come out of the closet, and black performers could star in major films.

The series follows a group of aspiring actors and filmmakers, who struggle to produce a ground-breaking film with a young black starlet in the leading role, despite the discrimination and strict social norms of the time.

For the show’s creators, the series was a chance to reinvent the future by recreating the past.

“Television … has a power to educate, enlighten and inspire people to hopefully change the way they think,” said Janet Mock, a transgender black woman who is an executive producer on the show.

Same-sex marriage was legalised in the United States in 2015, and most states allow transgender people to change their gender on birth certificates.

But gay and trans rights remain contentious, with several states introducing bills that would limit healthcare access to young transgender people in the last year.

Many in the cast have felt that tension firsthand.

Emmy Award-winning actor, Holland Taylor, 77, only went public about dating women less than five years ago. She is in a relationship with fellow actress, Sarah Paulson.

Taylor said there was pressure to keep such things private, for fear of how it might impact an actor’s career.

“It was secretive in the sense not of shame, it was just practical,” she said in an interview. “Absolutely this will hurt my chances getting cast in this, that or the other thing. It was just a knee-jerk reality.

“Let’s hope that no-one would feel a really conscious effort to hide in this day and age, and hopefully this show will help with that,” she said.

Being open about his sexuality wasn’t always easy for Jeremy Pope, who plays a screenwriter in Hollywood. He grew up in a religious family, and sang in the church choir.

“I was respected and praised in the church, but then you would go to school and people would call you sissy or gay,” he said.

Coming out, he added, “was freeing myself”.

Despite the show’s hopeful air, Hollywood was a reminder of how hard life could be in the 1940s, the actors said.

That was particularly the case for Rock Hudson, whose character comes out as gay in Hollywood. The screen idol kept his homosexuality secret, for fear it would hurt his ability to win leading-man roles, and died of AIDS-related illness in 1985.

But for Mantello, there was also joy in playing a deeply closeted studio executive, who finds himself later in life.

His character chose his career over his personal life, but discovered “you can have both,” he said.

This kind of representation, even if it only exists on TV, can influence social change, he added.

“You see an alternate version of history,” he said. “You automatically have to apply it to the present day.”

The show is testament to the power Hollywood has to transform society, Pope said.

“It’s a beacon of light, knowing that the people who made it are people of colour, are the minorities, are the outcasts,” he said. “(If you) give the outsider an opportunity, a voice, a seat at the table, then you could be … changing the world.”