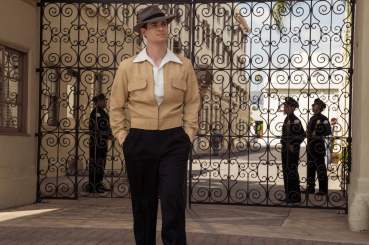 From the imagination of Ryan Murphy and Ian Brennan, this features a stellar cast, telling the story of moviemaking in Hollywood post WWII, when the ‘golden age’ was in its infancy. It’s just not telling the stories you know. With predominately fictional characters, this also reimagines some much-loved real life stars’ stories.

Following aspiring screenwriter, director, and actors as they come together to make a controversial film called Meg, featuring a black actress in the lead role, this rewrites a lot of Hollywood history.

Murphy and co are trying to address many, many, issues, so there are plot threads about racial discrimination, same-sex relationships, sexism, sexual harassment… in fact the only thing that they don’t seem to be trying to highlight are trans issues.

This results in everything becoming hugely diluted, even though the story stretches out over seven episodes. Also, despite the 1940’s setting, they use contemporary language rather than the more offensive language of the era (which was a huge source of complaint from the targeted groups during that period, and therefore deserves its place in any analysis of discrimination, as it is historically correct) which again, dilutes many scenes.

Also the fictional versions of real-life characters are in danger of colouring the real history of these legendary people. Acclaimed Chinese American movie-star, Anna Mae Wong, completely has her later career history rewritten.

The version of Rock Hudson portrayed here makes him appear completely gormless, and also sees him in a bi-racial relationship, which would have been as unthinkable as his real-life homosexual relationships during this era. He actually would have been thrown in jail, so to so completely rewrite not just his history, but the history of many gay men in Hollywood, feels incredibly reductive.

Ironically, one character who gets renamed and sidelined here is Dylan McDermott’s character, Ernie West. He is actually based on a popular and legendary real-life Hollywood pimp, Scotty Bowers, who has an incredibly interesting story, and his biography would make great viewing.

That said, there are some fantastic performances. Jim Parsons is ridiculously sleazy as a fictional version of talent agent, Henry Willson, a million miles from his best known role in the Big Bang Theory. Holland Taylor is brilliant as a studio mentor for actors at the fictional Ace Studios. And Mira Sorvino has a wonderful recurring role as a successful actress, who is also the mistress of the studio head. However, some roles are just really badly thought-out. In particular, Katie McGuinness, as a fictional Vivien Leigh, plays it almost as parody.

This looks fabulously glamorous and gorgeous throughout. It is incredibly stylish, but quickly runs out of substance. The story is far too convoluted, which is shame, given how many shocking and screen worthy true Hollywood stories there are.

It does a good job of highlighting the power plays and manipulation that came to light after many people had died. But it loses its way when discussing other issues. Much like Once Upon a Time in Hollywood, it tries to rewrite and reimagine history. However, unlike that, it takes on far too much, rather than focusing on one well-known story.

A rare occasion where Murphy has dropped the ball, this is an OK watch given the current CoVid lockdown, but not the kind of binge watch that sucks you in until your eyes hang out of your head from watching.

It’s like the fast food of binge watching. Looks great, has you craving it, but leaves you deeply unsatisfied.

← And the music plays on….Closer by the Tin Pigeons
Review – Murder to Mercy: The Cyntoia Brown Story (Netflix) →