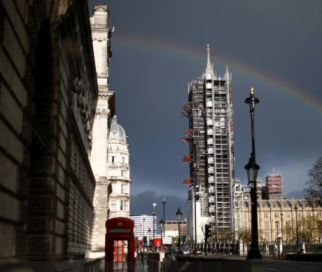 Britain is set to scrap plans to allow people to change their legal gender by ‘self-identifying’, and will protect female-only spaces, according to a report on Sunday, amid an escalating row over transgender rights fuelled by JK Rowling.

Prime Minister Boris Johnson was reported by the Sunday Times to have ditched measures drawn up before he came to power, to allow trans people to change their birth certificates without a medical diagnosis.

He was also reported to be drawing up ways to stop female-only spaces being used by trans women who have not had gender reassignment surgery.

The government will, however, introduce a ban on so-called ‘gay cure’ therapies, in what was described as a bid to placate LGBT+ people.

Spokespeople for the Government Equalities Office, and the Cabinet Office, declined to confirm or deny the report.

The report, based on a leaked paper, comes days after ‘Harry Potter’ author, Rowling, faced backlash for arguing against ‘self-ID’, and the US government rolled back Obama-era protections against discrimination in healthcare for trans people.

“The sentiments coming out are giving signals to trans people that they are less worthy in society and they have fewer rights to be who they are,” said Jay Stewart, chief executive of Gendered Intelligence, a trans rights advocacy group.

He expressed “disappointment” over ending reform of Britain’s 2004 Gender Recognition Act, which requires trans people live in their gender for two years, and get a medical diagnosis of gender dysphoria, to legally change gender.

A consultation into the act’s reform in 2018 set off a divisive debate in Britain, over what it means to be a woman, with opponents of ‘self-ID’ arguing it would allow predatory men access to women and girls in toilets and rape shelters.

However, US women’s rights groups said in 2016 that studies of 200 municipalities, that let trans people use rape crisis facilities and domestic violence shelters, found no rise in sexual violence or public safety issues as a result.

Countries including Ireland, Norway, and Argentina allow trans people to change their legal gender without any mental health diagnosis.

The Sunday Times said the paper was “basically ready”, and was being prepared for publication, but a source for the prime minister told the PA news agency that details were not yet finalised, and the prime minister would have the final say.

A Government Equalities Office spokesman said the response to the consultation on the Gender Recognition Act would be published this Summer, and referred requests for further details to previous comments by women and equalities minister, Liz Truss.

In April, Truss told parliament her priorities were “protecting single-sex spaces” and “making sure that transgender adults are free to live their lives as they wish without fear of persecution”. In May, she committed to banning gay ‘conversion therapy’.

Three countries – Brazil, Ecuador, and Malta – have outlawed treatment to change someone’s sexual orientation or gender identity, while Germany prohibited the practice for minors in May. Countries including the Netherlands, Canada and Mexico are considering bans.

Christine Burns, an advocate who has campaigned for trans rights since the early 1990s, said trying to prevent trans people from accessing toilets and other public facilities of their choice was unworkable.

“We deal with a tiny minority of people who do not conduct themselves responsibly in shared spaces, but it has never been necessary to legislate further,” said Burns.