Poles run for LGBT equality ahead of presidential vote 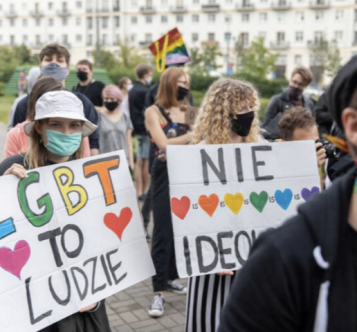 (Reuters) – Around a hundred Poles took part in an ‘Equality Run’ on Saturday, condemning discrimination against the LGBT community, during a presidential election campaign where gay rights have provoked fierce debate.

The run took place as a number of anti-government protests from groups, including LGBT rights protestors and feminists, took place in Warsaw.

Facing an increasingly tight contest for the June 28 vote, incumbent President Andrzej Duda, an ally of ruling nationalists Law and Justice (PiS), has attempted to rally his conservative base by taking aim at what he calls LGBT ‘ideology’.

PiS has said this is a foreign influence undermining traditional values.

“We need to show that we are everywhere, that we exist, we do sport, we have fun, it’s not like we are people with a foreign ideology,” said 26-year-old office worker, Zoska Marcinek, before the race.

The runners, some decked out in the rainbow flag of the LGBT community, ran 5 kilometres along the banks of the Vistula river.

Duda has drawn criticism for comparing the push for LGBT rights to Soviet indoctrination. A member of his campaign team said in a television broadcast last Saturday that LGBT people were not equal with ‘normal’ people.

Duda has said his words on LGBT ‘ideology’ and communism were taken out of context, while his campaign team has rejected accusations of homophobia.

Around 200-300 people gathered at a separate protest called ‘People, not an Ideology’ in central Warsaw, brandishing placards with slogans like ‘Make Peace, Stop PiS’.

“I am a normal person… like every other person, and I demand equality,” said 22-year-old student, Weronika Tomikowska, during the protest.

LGBT rights have been a major campaign theme in staunchly Catholic Poland, since the main opposition candidate, and Warsaw mayor, Rafal Trzaskowski, introduced a sex education programme in city schools over a year ago, that includes teaching about LGBT issues.