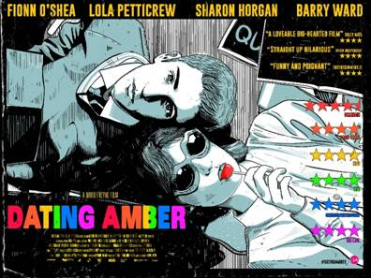 As cinemas across Ireland welcome audiences again, three Irish films, DATING AMBER, SEA FEVER and VIVARIUM, which were all due a theatrical release during the lockdown, are now showing on the big screen this weekend.

Demonstrating audience appetite for the cinema experience again, DATING AMBER has already sold out its scheduled screening on Monday 7 July in The Stella Cinema, with another screening now added for Sunday 19 July.

Set-in Ireland during the mid-90’s, Eddie (O’Shea) and Amber (Petticrew) decide to stage a relationship in order to stop everyone speculating about their sexuality.  Eddie is keen to follow his Dad into the military, while Amber dreams of moving to the liberal hub of London.  However, their ‘ideal’ arrangement begins to fall apart, forcing Eddie deeper into denial as Amber realises that a perilous future awaits her best friend unless she intervenes.

DATING AMBER is a poignant, honest and funny look at the highs and lows of teenage life where the only way to fit in is to not be yourself, even if this goes against your very being.

The tense and original sci-fi thriller SEA FEVER, written and directed by BAFTA-winning Neasa Hardiman (behind BBC triumph Happy Valley and Netflix hit Jessica Jones) is reminiscent of cult classics The Thing and The Abyss, and has been given the seal of approval by horror legend Stephen King.

For marine biology student Siobhan (Hermione Corfield), it was supposed to be a research excursion with a trawler crew fishing the West Irish seas.  But when they hit an unseen object and become marooned, a mysterious parasite infects their water supply.  Soon the oozing force infiltrates the entire vessel and turns Siobhan’s journey into a claustrophobic fight for survival.  Can they stop the mysterious water borne parasite from spreading before it’s too late?

During their search for the perfect home, Gemma (Poots) and Tom (Eisenberg) find themselves trapped in a mysterious labyrinth-like suburban neighborhood named Yonder. All attempts to escape end in failure, culminating in the discovery of a baby on the pavement outside house number 9, with the instructions ‘raise the child and be released’.

Reminiscent of the likes of Get Out and TV’s Black Mirror, VIVARIUM is as thrillingly provocative as it is wickedly enjoyable, and takes you on a trip into an unforgettable suburban Twilight Zone.