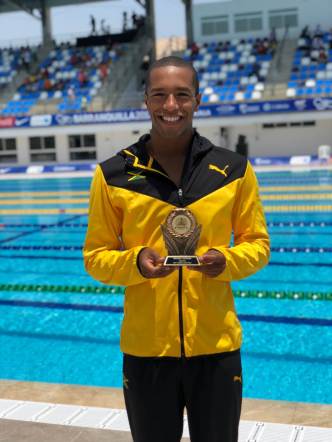 But rather than be bullied out of the water and a sport he loved, Gunning said the slights only made him swim faster.

“For me, it was just a motivation to prove them wrong and get selected for Team GB and be away for weeks from school and then come back and show them my medals,” he told the Thomson Reuters Foundation in a telephone interview.

This week, Gunning would most likely have been part of the opening ceremony of the Olympic Games Tokyo 2020 – had the new coronavirus not interrupted the games as well as his stellar career, with three Jamaica records already under his belt.

“I was so excited that I didn’t think about the nerves at the time,” he said, enthusiasm evident in his voice. “I was doing what I loved and had the best times going away with the team and flying the GB flag.”

Gunning, who holds both British and Jamaican citizenship, now represents Jamaica, having switched after being caught up in the Manchester Arena bombing in 2017, at an Ariana Grande concert, in which 23 people died.

“It really put life into perspective and that was the year that I decided to swim for Jamaica to inspire more people and to share my story,” he said.

At school, he had felt “very different… and I suppose that was my sexuality mixed in”.

In 2006, TIME magazine labelled Jamaica as “the most homophobic place on earth”, with gay sex outlawed and numerous attacks on the LGBT+ community.

Not the most obvious country for a successful swimmer to represent on the world stage, but Gunning said it in fact gives him a chance to shift the dial in terms of LGBT+ rights.

“The world is turning slowly and I think it is changing and I’m sure in time, Jamaica will accept LGBT people and legislation will change, but it’s a slow process and I think the more role models we have, the better,” he said.

If swimming proved a handy distraction from coming to terms with being gay, Gunning says it helped power him in the pool.

“Because I wasn’t ready to address my inner feelings, I put all of that effort into swimming and had a good junior career.”

He has the qualifying times for next year’s Olympics – postponed to 2021 by the coronavirus crisis – and has spent the lockdown training, and sharing a house with British Olympic swimming gold medallist, Rebecca Adlington, and her daughter.

[His enthusiasm] is unabated by the future challenges of Jamaica or the past taunts of Britain – his eyes are trained on 2021.

“We’ve worked so hard for it for so long and, yes, we’ve had a little dip in the road, and it’s been pushed back a year but I’m so excited,” Gunning said.