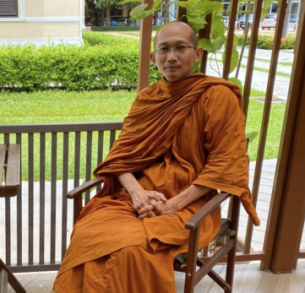 With his simple saffron robe and shaved head, Shine Waradhammo stands out at the often loud and colourful LGBT+ events that he occasionally attends in Bangkok, listening intently, taking notes, and engaging cheerfully with anyone who approaches him.

As a monk, Waradhammo is a rare – but welcome – presence in the LGBT+ community as Thailand prepares to pass a landmark civil partnership bill that would recognise same-sex unions with nearly the same legal rights as married couples.

A largely conservative Buddhist society, Thailand has a reputation for its relaxed attitude towards gender and sexual diversity since homosexuality was decriminalised in 1956.

Yet Thai LGBT+ people face discrimination and stigma in schools, the workplace and in healthcare facilities, and are often rejected by their families.

“Treating LGBT people badly goes against the Buddha’s teachings. LGBT people are also humans, they are also Buddhists, and as a monk I support and accept all Buddhist people, and aim to reduce their suffering,” Waradhammo, 52, said.

In Theravada Buddhism, which is practised in Thailand, LGBT+ people are sometimes mistakenly seen as paying the price for their bad deeds, or karma, in a previous life, said Waradhammo.

“The Buddha never said anything against LGBT people, so it is a very wrong interpretation of the scriptures that leads to bias and rejection of LGBT people,” said Waradhammo, who was ordained as a monk at the age of 21.

“Monks generally avoid talking about LGBT and gender issues, but we should be talking about issues that affect society, and religious teachings have to reflect the present times – otherwise religion becomes a dinosaur.”

If the Civil Partnership Bill is passed, Thailand will be only the second place in Asia after Taiwan to allow registration of same-sex unions, with couples able to adopt children, and with rights to inheritance and joint property ownership.

The bill was introduced in 2018, but the previous legislature failed to pass it before last year’s election.

Waradhammo supports a separate initiative by a Thai lawmaker representing LGBT+ groups for the Civil Code to be amended to define marriage as being between two persons rather than between a man and a woman – which he sees as more meaningful.

“The Civil Partnership Bill does not give equal rights. Changing the Civil Code would be better,” Waradhammo told the Thomson Reuters Foundation in an interview.

“But changing the Civil Code would take longer, as we still have many old-fashioned people in parliament. So perhaps they will prefer to pass the Civil Partnership Bill first.”

Two-thirds of Thais have no objection to same-sex unions, a 2018 survey by the United Nations found, and four openly LGBT+ lawmakers joined parliament last year, pushing for more rights – from a change in rigid dress codes to marriage equality.

“It is a sign that people’s attitudes towards LGBT people are changing,” said Waradhammo, who is active on social media, and frequently posts on gender and sexual equality, and responds to questions and comments on how these relate to Buddhism.

While Waradhammo’s influence is limited, his support for LGBT+ issues makes a big difference to those who come in contact with him, said Anjana Suvarnanda, co-founder of the Anjaree Group, which promotes LGBT+ rights.

“He is quite exceptional; it is not common to see a Buddhist monk take such an interest in these issues, and be vocal and supportive, and even show up at events,” said Anjana, who has known him for about 20 years.

“He also helps us frame the argument from the religious perspective, reminding people of the Buddhist philosophy of accepting all people. If we had more monks like him, it would make a real difference,” she added.

Waradhammo, who poses playfully for selfies, sees his vocal support of LGBT+ people as necessary.

“I think it helps them to see a monk who is friendly and gives them an interpretation of the Buddhist religion that supports them,” he said, shrugging off his unique position.

“It is important that they know they are equal and accepted, and have the same rights as everyone else.”