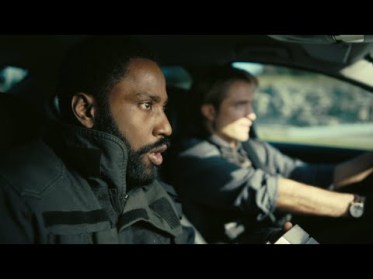 There has rarely been so much pressure on a film. Tenet has been lauded as the movie that will save cinemas, following their closure due to Coronavirus. Although many have reopened now, the guidelines see them operating at severely reduced capacity, and there has been little in the way of new releases, with many distributors still opting to release stuff on VOD, until the current situation settles. That means that Tenet becomes the first blockbuster of the year, and the first truly huge release in cinemas since early March.

Forget about easing yourself back into your movie experience though, as Tenet is a super-complex time travel spy thriller, in which Washington is The Protagonist (literally that is the characters name). He finds himself working for a secret agency, on a mission to prevent World War III. He is given little to work with, except the codeword Tenet, and a hand gesture. He learns that in the future a technology has been developed to allow objects to move backwards through time, reversing their entropy, and that these objects will eventually lead to the end of the world, unless he can prevent it.

As I said, Tenet is super complex. And I’ve actually simplified it a lot in order to avoid spoilers (and there are a lot of twists in this – although you do see some of them coming). Between the time travel and the complex physics there is no let-up, and it demands your full attention. Indeed, there are so many layers to the story, that, much like one of Nolan’s previous offerings, Inception, it will probably require more than one viewing to answer all your questions.

Washington looks the part, and can kick ass in the action scenes, but just somewhat lacks the charisma needed for a character like this. He is deadly serious, and there is no humour or layering in his performance.

Thankfully Debicki, as the wife of a crazed Oligarch, brings some depth to her role (it helps that her character is one of the most fleshed out) and she works well with Branagh as her estranged husband. Pattinson has some good moments as The Protagonist’s handler, but is somewhat inconsistent. However, he does help bring some contrast to Washington’s character.

Visually Tenet is an absolute spectacle – as you would expect from a Nolan production. It is beautifully shot, and really does demand to be seen on the big screen to get the full impact. It is lavish and mostly entertaining, but often tries to be too clever for its own good, leading to one or two moments that can only be described as dull.

Tenet is extremely cerebral – like a puzzle wrapped in a conundrum – and you will find yourself analysing and questioning it long after the credits role. It will undoubtedly get bums back on cinema seats, but it will confuse as much as it engages.