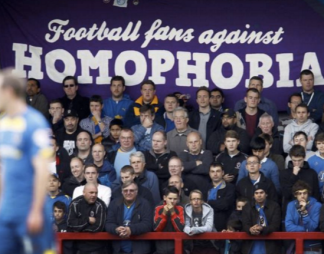 Reports of racist and homophobic abuse at football matches in Britain soared to a record high in the last year, despite the disruption to the season from the coronavirus pandemic.

Recorded discrimination in the 2019/20 season at professional games rose 42% to 446, with homophobic abuse almost doubling, and reports of racism increasing by 53%, according to Kick It Out, an advocacy group that collates incidents.

The rise comes amid global pressure over racism sparked by the Black Lives Matters protests, though advocates and LGBT+ fan groups said it was partly due to fans being more willing to report abuse, even by their own team’s supporters.

“There’s a lot less stigma about reporting – in some ways that’s very encouraging,” Rodney Kumar, a spokesman for Kick It Out, told the Thomson Reuters Foundation.

“But obviously it’s quite alarming that we have seen pretty big increases when it comes to all manners of discrimination around football, which we do want to tackle.”

A 12-year-old boy was questioned by police in July after Wilfried Zaha, a striker for Crystal Palace and the Ivory Coast, was sent racist messages on Instagram, including a picture of the Klu Klux Klan.

Reports of all types of discrimination on social media fell almost 24%. Kumar attributed this in part to faster action by companies to remove online abuse.

Premier League clubs including Everton and West Ham United investigated reports of homophobic chants at their games in December, while Chelsea, a common target of such abuse, banned a group of Manchester United fans from a game in February.

Kumar said about half the 117 incidents of homophobia at matches were groups singing songs, while half were individuals shouting homophobic comments.

“When you hear those chants it can be quite depressing,” said Mike Homfray, the joint head of Everton LGBT+ supporters group, Rainbow Toffees.

“It’s too easy to be drawn into this sort of behaviour.”