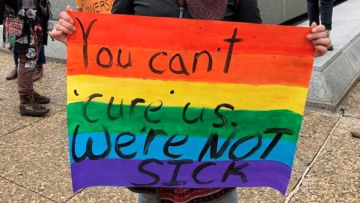 New Zealand’s centre-left government pledged on Monday to ban so-called LGBT+ conversion therapy if re-elected later this month as expected, following other countries that have outlawed the discredited practice.

In Canada, the government reintroduced a bill last week to criminalise conversion therapy, which is any treatment designed to change a person’s sexual orientation or gender identity.

Here is the status of the practice in various locations around the world:

* Germany banned gay conversion therapy for under 18s, but stopped short of an outright ban. Advertising or offering the treatment can lead to fines of 30,000 euros ($32,500) or up to one year in jail.

* Conversion therapy is illegal in Brazil, Ecuador, and Malta.

* The United States does not have a federal ban on conversion therapy, but 20 US states, including California, Colorado, New York, Washington, and more recently, Utah, prohibit the practice to some degree. Nearly 700,000 Americans have undergone conversion therapy, half when under 18, according to the UCLA’s Williams Institute.

* In Canada, the cities of Vancouver and St. Albert have already banned conversion therapy, while the provinces of Ontario, Manitoba, and Nova Scotia have restricted it. An earlier effort to ban the practice across the country failed, as the parliament was discontinued due to the coronavirus pandemic.

* The Australian state of Queensland passed the country’s first conversion therapy ban, with jail sentences of up to 18 months for doctors and social workers involved in the practice.

* Britain and Ireland have drawn up bills to outlaw conversion therapy, but they have stalled. A fifth of gay, lesbian, and bisexual Britons, who have tried to change their sexuality, have attempted suicide.

* While the treatment is illegal in Ecuador, campaigners say gay people, particularly lesbians, are forced to undergo it in secret clinics. Often admitted to clinics by their families, they endure beatings, solitary confinement, forced medication, and even ‘corrective rape’.

* Brutal and extreme conversion methods, including torture, forced internment, electroshock therapy, and sexual violence, have also been documented, in countries including South Africa, the Dominican Republic, and China.

Sources: ILGA, the Williams Institute at the University of California, LGBT Rights Program at Human Rights Watch in New York, the Ozanne Foundation, and Taller de Comunicacion Mujer of Ecuador